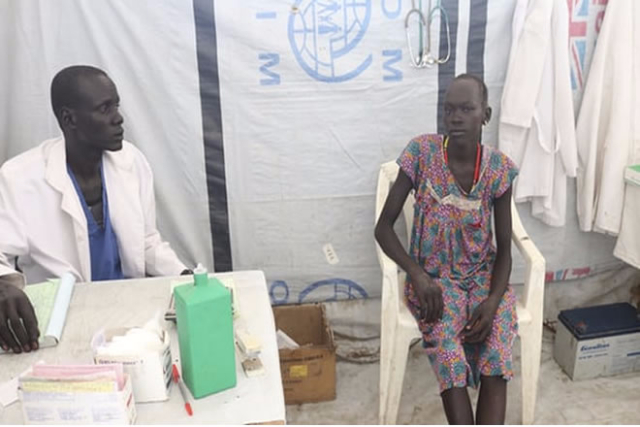 Doctors, aid workers and officials in South Sudan are warning of a “devastating” outbreak of cholera which could kill thousands in a country where millions are already threatened by famine.

More than 2,500 cases of the deadly disease have been registered since April, a sharp increase over previous months. The total over the last year has now risen to 8,000, with about 250 confirmed deaths. Experts say this is likely to be only a fraction of overall casualties.

With no sign that conflict in the world’s youngest country will abate soon, the start of the rainy season and a population weakened by years of displacement and malnutrition, there are fears that cholera will “run out of control”.

Worst hit are likely to be children and those who are forced to live in unsanitary, crowded conditions in temporary settlements.

Medical staff fear an outbreak in hospitals where many of the weakest have sought treatment. There are few functioning medical institutions in South Sudan and these often care for three or even four times the number of patients they were designed to accommodate.

At the Al-Shabbah children’s hospital in Juba, where a single bed is shared between three patients, three cases of suspected cholera were reported last week.

“The fear is that such an infectious disease in this very overcrowded hospital could be devastating. The children are very weak and we don’t have enough drugs. The demand is huge,” said Dr Felix Nyungura, director of the hospital.

More than 200,000 people are currently surviving in “protection of civilian camps” set up by the UN to provide a haven for those displaced by the ongoing fighting across much of South Sudan. They too are threatened by the disease, which can kill in hours.

“Last year we had cholera incidents in the camp and now the rainy season is here cholera is the big concern,” said Thomas Makur, an administrator of a camp where more than 30,000 people live adjacent to the principal UN base in Juba, the capital.

Those displaced by recent fighting in South Sudan are at most risk. The international NGO Médicine Sans Frontières has opened a cholera treatment centre near Pieri in the remote north east of South Sudan.

More than 27,000 people have fled their homes in the region since mid-February after clashes between the Sudan People’s Liberation Army (SPLA) and opposition groups.

Last week the UN said that the number of people struggling to find enough food each day in South Sudan has grown to 6 million – up from 4.9 million in February. This is the highest level of food insecurity ever experienced in the world’s youngest country since it gained independence in 2011 from Sudan after decades of intermittent conflict.

Though it has suffered drought, the crisis in South Sudan has political, not climatic, causes. Violence surged last year after a peace deal between President Salva Kiir and his arch rival Riek Machar collapsed. Machar has now fled the country, but groups still loyal to him continue to fight government forces. The government’s authority is limited, with widespread and increasingly chaotic conflict between local factions, cattle raiding and armed robbery.

Almost all protagonists in the fighting have been repeatedly accused of systematic and extensive human rights abuses.

There is a strong ethnic dimension to the violence, with civilians frequently targeted because of their tribe. Kiir and his former vice president, Machar, come from rival ethnic groups. Civilians who have fled the violence to neighbouring countries say government troops, mostly drawn from Kiir’s Dinka tribe, carry out killings and other crimes against Machar’s Nuer and other smaller tribes suspected of supporting rebels.

A UN report into violence last year found evidence of widespread atrocities against civilians including massacres, gang rape, abduction of children, unlawful detention and torture. The government has rejected its findings.

“There are dead ends all around … I think we can still do something but we desperately need international pressure on the parties to go back to the table and be serious about peace,” Filippo Grandi, the head of the UN high commission for refugees, said last week.

Aid workers were struggling to raise funds, partly because of frustrations over the lack of progress in peace talks and partly because the scale of the problem was hidden, Grandi told reporters during a visit to Juba.

“They [South Sudan’s refugees] don’t arrive on the shores of Europe, or Australia or at the border between Mexico and the US. Those are the places where refugees become visible and their voices are heard,” he said.

In an interview with the Guardian, David Shearer, the top UN official in South Sudan, underlined the logistical problems of operating in the country.

“No one quite realises the logistical hassles of this place. You can’t even move around. Travelling the 600 miles … takes two and a half weeks. In the wet season the roads are just impassable. There are 220 kilometres of tarmac roads in a country the size of France,” Shearer said.

More than two million people have fled South Sudan, with over a million now living in neighbouring Uganda.