Akufo-Addo, Asantehene, others expected to grace Hogbetsotsoza on Saturday 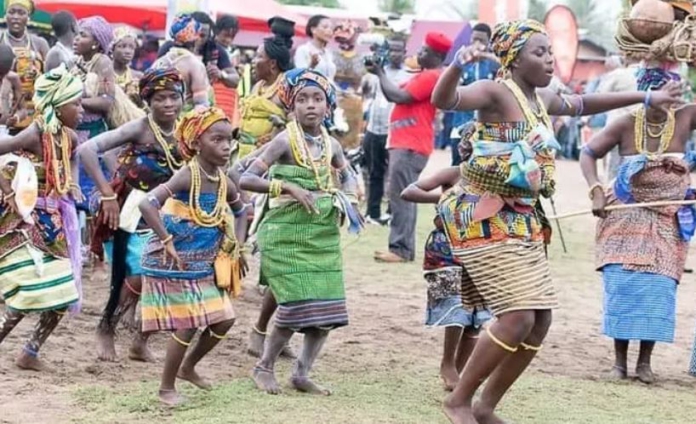 President Nana Akufo-Addo, the Asantehene Otumfuo Osei-Tutu II and his retinue of chiefs will on Saturday November 5 join the chiefs and people of the 36 states of Anlo to celebrate the annual traditional festival, Hogbetsotsoza.

Daasebre Akuamoah Agyapong II, the Kwahuhene and King Tackie Teiko Tsuru II, the Ga Mantse are also expected to be guests at the famous festival.

The festival also known as Hogbeza commemorates the legendary exodus of the Ewe-Dogbo folks from Notsie in present-day neighbouring Togo.

The celebration  is returning this year after its suspension in 2020 and 2021 in compliance with COVID-19 protocols.

The presence of the Asantehene would mark the celebration of the age-long relationship between the Anlo State and the Asanteman while that of the Kwahuhene and Ga Mantse would help forge a bond with the two kingdoms as part of the bigger objective of using the Hogbeza platform to foster unity, peace and national cohesion.

Daasebre Osei Bonsu II, Mamponghene represented the Asantehene at the 2019 Hogbetsotso Festival at Anloga after Togbi Sri III, the Awoamefia of Anlo visited the Manhyia Palace in Kumasi for the 2018 Akwasidae.

Mr Ken Kpedor, President of Anlo Youth Council, the umbrella body of the youth of Anlo, in an earlier interview with the Ghana News Agency, called on citizens of Anlo, both home and abroad to patronise this year’s festival being held on the theme: “60 Years of Anlo Hogbetsotsoza: Uniting for Development, Sustaining our Unique Cultural Commonwealth for Future Generations.”

“I urge all citizens of Anlo, especially the youth to come home for the single most important event on the Anlo calendar, the Hogbetsotsoza. It is ours and its celebration has benefits for us and the Anlo State. Let’s patronise it to make it the best traditional festival in Ghana.”

Mr Silas Aidam, Publicity Chair, 2022 Hogbetsotsoza Planning Committee also appealed to the Anlo citizens, cultural enthusiasts, local and foreign tourists to the festival, which he said “bounces back in a special form.”

Hogbeza is celebrated every first Saturday in November at Anloga, the traditional and ritual capital of Anlo State and is usually characterised by a display of rich tradition and culture with patrons treated to a variety of drumming and dancing, including the ever-popular “agbadza”, “atsia” and “misego” or “husego”, the incorporated dance style of the backward movement of the people during their escape from Notsie.

DISCLAIMER: The Views, Comments, Opinions, Contributions and Statements made by Readers and Contributors on this platform do not necessarily represent the views or policy of Multimedia Group Limited.
Tags:
Akufo-Addo
Asantehene
Hogbetsotsoza