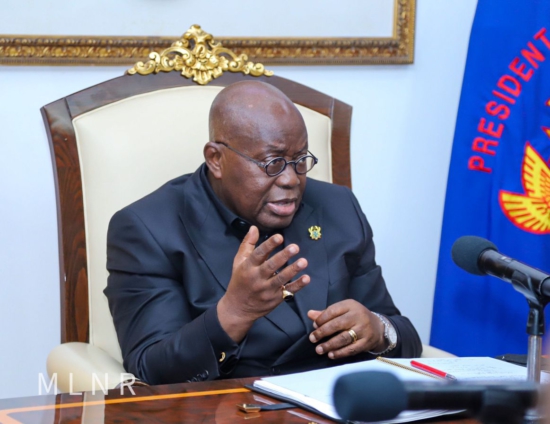 President Akufo-Addo has charged the Lands and Natural Resources Minister, Samuel Abu Jinapor to begin the process to evaluate and comprehensively review the safety protocols in the mining sector to conform to modern trends and demands.

“I think that there is one thing that comes up with this idea. I don’t know whether it would have been possible but we obviously have to focus on the whole issue of safety in the mining communities and in the mining sector.

It’s on the table, we can’t run away from it. In many cases, reforms, that’s how it happens. It calls for some serious review on safety measures following the discourse in the newspapers….. I think that this gives us an opportunity to look at the whole regulatory framework focusing on safety as far as mining activities and development of the mining sector is concerned,” Akufo-Addo said.

The directive follows last week’s explosion involving a truck carrying explosives at Apeatse near Bogoso in the Western Region.

The explosion led to the death of 14 people and dozens injured. Also, some 30 houses were destroyed.

Speaking to members of the Apeatse Support Fund who were at the Jubilee House to be formally introduced to him, the President called for a review of the 10-year-old mining law with explicit provisions regarding the role of the Police in transportation of explosives.

On her part, the Chairperson of the support fund, Dr Joyce Aryee said the committee will explore ways to construct a model town for Apeatse.

According to her, the level of enthusiasm for the fund is very high. Therefore, they are of high hopes that sufficient funds would be raised for the project.

“We have many of our members who themselves are very passionate about this task that we’ve been given and even in their sleep they are thinking about it,” she added.

Lands and Natural Resource Minister, Samuel Abu Jinapor who established the committee said it is made up of people with expertise in the mining sector.

He also noted that the committee will recommend measures to inform a policy direction.