Akufo-Addo came to court with over 11,000 pink sheets and evidence in 2013 – Oppong Nkrumah 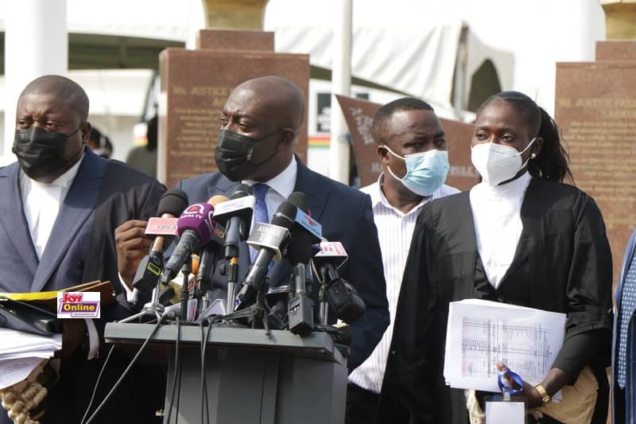 The spokesperson for President Akufo-Addo’s legal team says the petitioner’s witnesses have failed to provide evidence to prove their case in the election petition hearing.

Kojo Oppong Nkrumah told the media after Monday’s hearing, that comparing the ongoing election petition filed by the 2020 NDC presidential candidate, John Mahama to the 2013 election petition there is a clear distinction.

He stressed that in the 2013 election petition hearing, the petitioner, Nana Akufo-Addo who was the 2012 NPP presidential candidate went to court with over 11,000 pink sheets among other evidence to prove his case.

An act, according to him, former President Mahama and his legal counsel have failed to do in this years’ case.

“You have come to court with a specific petition and the onus of proof is on you the petitioner to show to the court that this is the basic case and therefore, somebody has a question to answer.

“[As you know] in the 2013 election petition, the EC Chairperson then, mounted the witness box because the petitioner came to court with pink sheets of about 11, 000 polling stations and made an argument that when you deal with the lack of signatures, the multiple serial numbers etc. which are all infractions, and you strike them out, you will have to call a proper declaration that, Nana Addo Dankwa Akufo-Addo won the 2012 election.

“You have been here, and you have heard the bench asking the petitioner over and over again that; Where are the numbers?” and time and time again they made the point that it is not relevant to their petition. And that they are not here looking for new numbers or new declaration but they are in court to question the conduct of the EC Chairperson,” he stated.

Mr Nkrumah’s comment comes after the legal counsel of both the first and second respondents prayed the Court to withdraw their witnesses from testifying in the election petition.

According to the lawyers, Mr Mahama has failed to meet the threshold of presenting a substantive case to the court, hence, their witnesses do not have any questions to answer to.

But the legal team of the petitioner accused the witnesses, particularly, the EC Chairperson, Jean Mensa of trying to ‘run away’ from cross examination.

They also contend that it will be in the ‘interest of Ghanaians’ if the Chairperson mounts the witness box and clears the air on issues that have been raised by the petitioner.

But reacting to this assertion, the Spokesperson said the first and second respondent will not be tempted to put their witnesses in the witness box with propaganda statements such as ‘it is in the interest of Ghanaians’.

He then took a jibe at the petitioner and his legal team that “they have lost the battle” hence they have resorted to “propaganda” adding that, “this is a court of law and not a court of public opinion.”