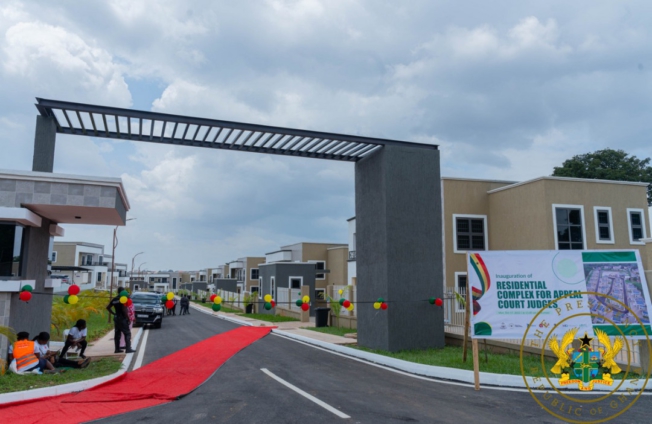 President Akufo-Addo, on Monday, 17th October 2022, commissioned a residential complex for Court of Appeal Judges in the Ashanti Region, as well 120 courts and 150 bungalows across the country.

According to President Akufo-Addo, in the course of his first term in office, Government took note of the inadequate numbers of courts in various parts of the country, resulting in citizens travelling long distances to gain access to courts.

“For example, there was no Court between Adjabeng and Amasaman in the Greater Accra Region, neither was there a Court between Adum in Kumasi and Asante Bekwai or Obuasi in the Ashanti Region. I was also informed that some judges lived in insecure housing, and were subject to abuse and threats after their judgements,” he said.

The President continued, “That is why, in my Message on the State of the Nation, on 9th March 2021, Government, through the Ministry of Local Government and the District Assembly Common Fund, has commenced, in an unprecedented initiative, the construction of ninety (90) courts with accompanying accommodation for judges across the country, to help address the problem of inadequate court infrastructure.”

However, President Akufo-Addo noted that through the efficiency and ingenuity of the Administrator of the District Assembly Common Fund, Irene Naa Torshie Addo, “we are, in fact, constructing 120 courts and 150 bungalows and not the 90 that was contemplated earlier”.

Indeed, 70 percent of these projects, the President noted, have been completed, stressing that “with the commissioning of this residential complex here, in Kumasi, and the Magistrates Court in Toase later this afternoon, I deem all the completed projects duly commissioned.”

He, thus, charged the Chief Justice to take over and begin to post officers to start work with immediate effect.

President Akufo-Addo was hopeful that this massive infrastructural development will motivate the Judiciary to work even harder to promote justice and the rule of law in the country.

He assured that “we will continue to implement policies to advance the rule of law, and, thereby, reinforce the confidence of the people, and shore up our nation’s reputation as a country governed by the rule of law.”

The President expressed his appreciation to the Asantehene, Otumfuo Osei Tutu II, for providing the land for the construction of the residential facility.

Courts
Six new Regional High Courts are also being constructed in the newly created regions, i.e., Ahafo, Bono East, North East, Oti, Savannah and Western North. Three of the Courts, that is those in Ahafo, Bono East and Oti Regions, have been completed and are ready for commissioning.

The other three, that is those in North East, Savannah and Western North, which are at 80% completion, will be ready for commissioning by the end of the first quarter of 2023.

The new, modern Court of Appeal complex in Kumasi, together with 20 townhouses and a guesthouse to serve as permanent residences for Court of Appeal Judges based in Kumasi, who will be mandated to handle appeals from the northern sector of the country, has been completed and commissioned by the President.

DISCLAIMER: The Views, Comments, Opinions, Contributions and Statements made by Readers and Contributors on this platform do not necessarily represent the views or policy of Multimedia Group Limited.
Tags:
120 courts
150 bungalows
Akufo-Addo
Judiciary