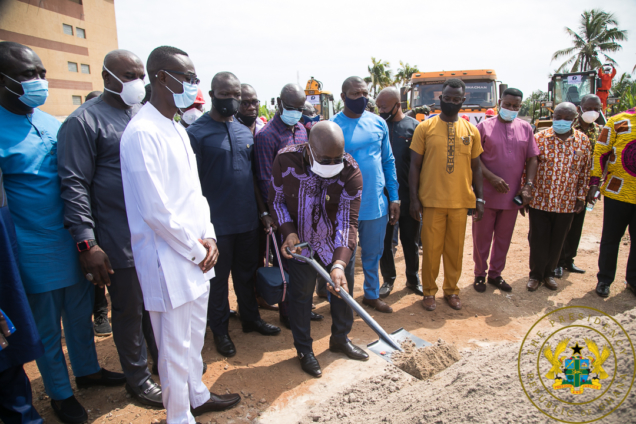 President Akufo-Addo has cut the sod for the commencement of construction of the La General Hospital Redevelopment Project.

At the sod cutting ceremony on Tuesday,  August 10, President Akufo-Addo indicated that the redevelopment project has been occasioned by a report from the Ghana Health Service, which indicated that the five-storey structure of the Hospital had developed gaping cracks, which made the facility unfit for use.

Furthermore, the unplanned nature of the entire hospital campus required that it be re-organised so that it can function efficiently as a 21st century hospital, which will serve the needs of residents of La and its adjoining communities.

With Government’s policy of achieving Universal Health Coverage for all, which demands that access to decent healthcare is guaranteed for every Ghanaian, no matter where they live, the President explained that this is the reason why Government had to source quickly the requisite funding to embark on the redevelopment of the Hospital, in view of its strategic location in our nation’s healthcare delivery system.

“This facility, in so many ways, complements the Greater Accra Regional Hospital at Ridge, and its upgrading will serve most people from Osu through La and Teshie, as well as residents living along the coastal corridor of Accra,” he said.

President Akufo-Addo continued, “Indeed, with admissions to this Hospital, arising from maternal health and other related complications, increasing from 20.5% in 2008, to 30% in 2017, and with pregnancy and related conditions, for the first time in the history of the life of this Hospital, being the number one cause of admission, require that we improve rapidly the facilities of this hospital”.

This redevelopment project is being financed by a credit facility from Standard Chartered Bank of the United Kingdom, with an export credit guarantee from Sinosure of the People’s Republic of China, to the tune of €68 million, with an insurance cover of €3,860,349.18.

The project will be undertaken by the Chinese company, Poly Changda, which has wide-ranging experience in China and other parts of Africa in the construction of healthcare facilities.

Upon completion, it will be transformed into a 160-bed facility, and it will be fitted with an outpatient department; inpatient wards; maternity and neonatal services; a surgical unit with four theatres; accident and emergency department; public health department; pharmacy unit; laboratory; administration; imaging area, with CT Scan, X-ray room, ultrasound, fluoroscopy, mammography units; physiotherapy unit; and a mortuary

Whilst the construction of new infrastructure is ongoing, President Akufo-Addo assured that the Ministry of Health is also putting in place measures, such as retraining of existing staff and support to the various Colleges of Health Education, to guarantee the presence of the necessary human resources to man the facilities that will be constructed.

“Upon my assumption of office in 2017, we started recruiting doctors, nurses, pharmacist, allied health professionals and other support staff, who were unemployed after completing their mandatory housemanship rotation or internship,” he said.

The President added that Government, each year, has been providing financial clearance for those who were eligible to do their housemanship rotation and internship.

“As of July this year, government has recruited 90,696 permanent and temporary healthcare workers. Out of the total employed, 29,518 are temporary staff, whilst the remaining 61,178 are permanent,” he added.

To the Chiefs gathered, President Akufo-Addo assured that “this project is a sign of greater things to come for La, and, indeed, for the whole nation. Government’s commitment to the total development of Ghana is absolute”, adding that “I expect that all of us, gathered here, will be present again, God-willing, for the commissioning of this project, once it is completed.”