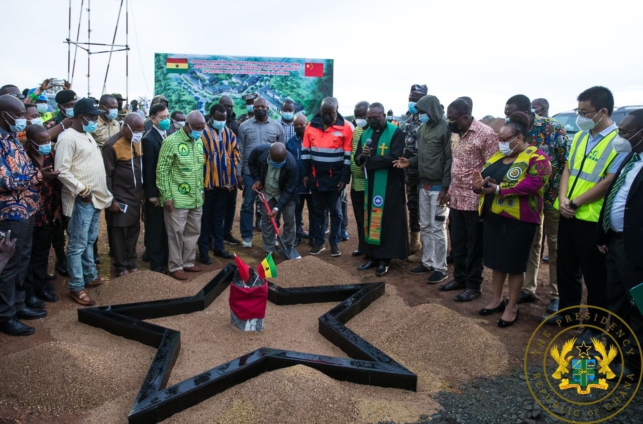 President Nana Akufo-Addo on Friday cut the sod for the commencement of work on the second phase of the University of Health and Allied Sciences (UHAS) Project, in Ho, in the Volta Region.

The first phase of the University Project was funded by the Chinese Government through its development Agency, China AID, at the cost of 104,850,000RMB (Chinese Yuan), equivalent to some $16 million.

The facilities present at the facility include administration block, classrooms, library, laboratory, auditorium, student’s activity centre, and a cafeteria for the School of Basic and Biomedical Sciences.

It will be recalled that Phase I of the project, which covers a total construction area of 10,386 meters square, was completed and handed over to the University some five years ago.

According to the President, the government recognises that the university still requires additional infrastructural projects to deliver on its mandate effectively despite all the facilities present.

He explained that it is for this reason that the Ministers for Education and Finance worked in unison with the University Management to secure funding from the Chinese Government to the tune of $60 million for the commencement of the second phase of the expansion projects.

He said Phase II of the project will also accommodate the Central Administration of the University and the School of Nursing and Midwifery (SONAM), the biggest in Africa, upon completion.

President Akufo-Addo told the gathering that, as a demonstration of government’s commitment to the project, government has made available ¢6.2 million counterpart funding for the preliminary works to cover the extension of electricity, municipal water supply, construction of storm and waste drains, and all ancillary services required for the project implementation.

Commending the management of the University for constructing ultramodern student hostels from internally generated funds, the President assured the University that his administration will not renege on its commitment to help the University provide quality education for its students.

Preparatory works for the construction of the China Phase II project started with a request from the Vice-Chancellor, Professor John Gyapong, in 2017, and was “blessed” with the signing of exchange of notes between the Finance Minister, Ken Ofori-Atta, and the Chinese Ambassador to Ghana on January 11, 2019.

This paved way for the commencement of preliminary works on the project, with a delegation from China visiting the University in March 2019 for a reconnaissance survey of the proposed site and conducted feasibility studies on the proposed project.

In June 2019, the design team from the China Urban Construction Design & Research Institute Co., Ltd. (CUCD), the Consultants of the Chinese government, visited the University with preliminary sketch designs for discussion with the user departments.

After extensive deliberations with the Technical Staff of the University, revisions were made to some aspects of the sketch designs based on the lessons from the execution of the Phase I project.

In July 2019, another team of experts from China visited the proposed project site and conducted a site survey and geotechnical investigations to help complete the designs.

Subsequently, the technical team from the University of Health and Allied Sciences, led by the Vice-Chancellor, met the Chinese Consultants in October 2019 to review preliminary designs, agreed on modifications, and signed off for implementation.

DISCLAIMER: The Views, Comments, Opinions, Contributions and Statements made by Readers and Contributors on this platform do not necessarily represent the views or policy of Multimedia Group Limited.
Tags:
China Phase II Project
President Akufo-Addo
University of Health and Allied Sciences
Volta Region