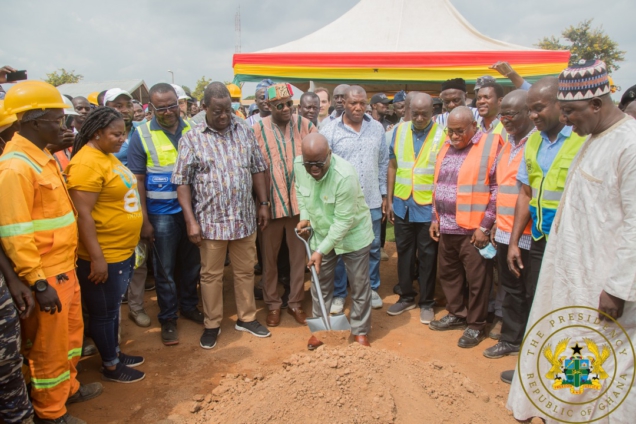 President Nana Akufo-Addo on Monday cut sod for the commencement of work on the Yendi Dualisation Road Project at a short ceremony in Yendi, in the Northern Region.

Spanning a length of 2.53 kilometres, the Project is expected to be completed within seven months, specifically on March 8, 2023.

At the sod-cutting ceremony, the Minister for Roads and Highways, Kwasi Amoako-Atta, stated that Lot 5 of the Eastern Corridor Road, which starts from Oti Damanko through Bimbilla and ends at Yendi, covers a distance of 94 kilometres, whereas Lot 6 starts from Yendi and ends at Zanteli, making a total length of 116 kilometres.

He told the President that the project, when completed, will serve as an alternative route to the central corridor and facilitate the transportation of agricultural produce and livestock from the northern part of the country to the south.

The Minister added that other benefits include improving socio-economic activities along the corridor, thereby reducing the citizenry’s poverty, road traffic crashes, and vehicle operating costs.

Currently, the contractor has completed 165.5km of roads between Oti-Damanko and Zanteli. The sections through Yendi and Bimbilla towns would be dualised as part of the project.

Mr Kwasi Amoako Atta revealed further that the dualisation of the Yendi and Bimbila towns will lead to a reduction in congestion in the urbanised areas and, consequently, a reduction in overall travel time along the corridor.