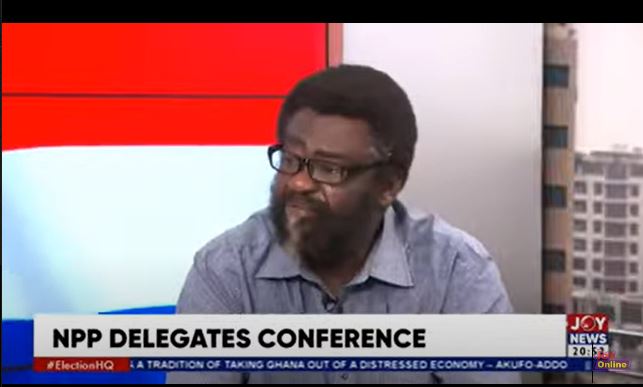 Political Science Lecturer at the Kwame Nkrumah University of Science and Technology (KNUST), has asserted that President Akufo-Addo has been allowed to do as he pleases with the New Patriotic party.

According to Dr Richard Amoako Baah, the President was allowed to select Dr Mahamudu Bawumia as his Vice Presidential candidate when he had not served the party for five years as required. He also had issues with President Akufo-Addo’s endorsement of the appointment and subsequent election of Mr. Freddie Blay as Chairman of the party.

His comment was in reaction to a statement of gratitude made by outgoing National Chairman of the NPP, Freddie Blay. Mr. Blay thanked President Akufo-Addo in his welcome address at the party’s National Delegates Conference on Saturday for making it possible for him to serve as National Chairman.

Reacting to this, Dr Baah said: “the leadership of the New Patriotic Party handed over the party to President Akufo-Addo.”

This he claimed enabled President Akufo-Addo to handpick his own delegates “including him [Freddie Blay] as National Chairman.”

He added that President Akufo-Addo also picked the Vice President, Dr Mahamudu Bawumia in spite of opposition from other big wigs of the party.

“… because to be on a ticket like that you have to serve in the party for five years. He had not, yet he became Vice President. So it is almost as if the whole party was handed to him (President Akufo-Addo),” he said.

DISCLAIMER: The Views, Comments, Opinions, Contributions and Statements made by Readers and Contributors on this platform do not necessarily represent the views or policy of Multimedia Group Limited.
Tags:
Akufo-Addo
Dr Richard Amoako Baah