Akufo-Addo has made dishonesty and hypocrisy the order of the day - NDC - MyJoyOnline.com 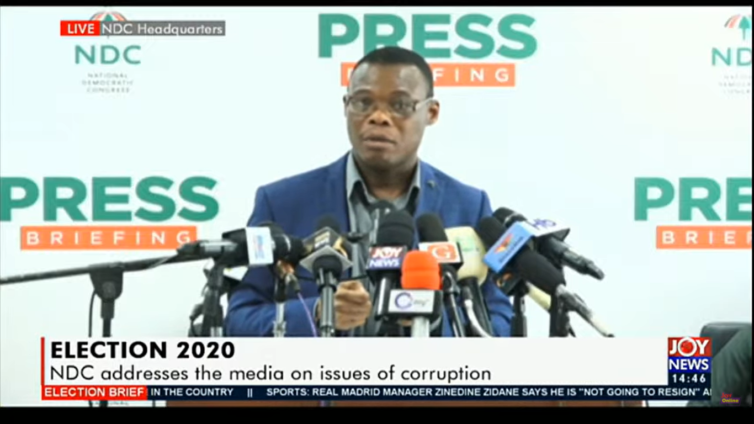 The National Democratic Congress (NDC) has accused President Akufo-Addo of perpetuating dishonesty and hypocrisy in his governance.

This comes after a video that shows President Akufo-Addo receiving an amount of money has surfaced on the internet.

According to the NDC in a press briefing Wednesday December 2, the president was given a $40,000 bribe not to fire the Director of Urban Roads.

The New Patriotic Party (NPP), however, at a concurrent press briefing dispelled the allegation, noting that the video had been doctored, adding that the said amount was a donation for their 2016 campaign.

Addressing an emergency press conference dubbed “The Mother of All Corruption” on Wednesday, Member of Parliament for Ketu South, Fifi Fiavi Kwetey said the President and the NPP in 2016 touted themselves at the ‘Messiah’ who will prioritise the interest of the people.

He, however, was of the view that the country has not only witnessed numerous corrupt activities under the regime of the Akufo-Addo government but has also witnessed the extent to which his administration will go to cover up its ‘rots’.

According to him, the Akufo-Addo government is gradually destroying the soul and social fibre of the country with its “lies, deception and hypocrisy”.

“We are not asking for perfection, there is no perfect leader anywhere in the world. So the danger is not about being imperfect, the danger is when you have an imperfect being who has absolutely made hypocrisy and deception something that literally threatens the country.

“It is important to appreciate that leadership is all about credibility but in the Akufo-Addo government’s credibility is not simply in what we are about to see, you this lack of credibility can be seen in the politicking. They don’t have the courage to appreciate what the truth is. So they simply go to every length just to cover it up,” he stated.

Mr Kwetey added, “Hypocrisy is graver than collecting bribe. The collecting of bribe is bad enough, but we have on top of it, a presidency that simply is making sure that hypocrisy and deception become the order of the day, then this country is in trouble, we are doomed.”

The Ketu South legislator castigated people he described as ‘voices of conscience’ for turning a blind eye to the unacceptable activities of the Akufo-Addo government.

For him, they are causing more damage to the system which in turn could affect future generations.

“And if you in the media and others who have what we call ‘voices of conscience’ continue to pretending acting “we have not heard, we have not seen, we cannot speak” and allow this to continue then we are destroying this nation and our children will be in trouble.”