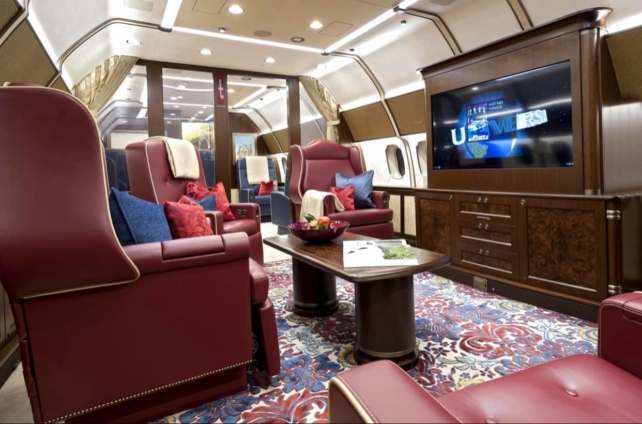 The North Tongu MP, Samuel Okudzeto Ablakwa, is alleging that President Akufo-Addo hired another luxurious aircraft on his recent foreign trips to the UK and Germany.

According to the NDC legislator, the trips on the hired jet cost the state £14,000 per hour and a cumulative ¢3.46 million.

Earlier this year, Okudzeto Ablakwa stirred controversy when he alleged that President Akufo-Addo hired a private jet at the cost of ¢2.8 million on his travels to France, Belgium and South Africa at the expense of tax-burned Ghanaians.

He filed a question, and Parliament summoned Defence Minister, Dominic Nitiwul, to answer questions on the cost and why Ghana’s own presidential jet was not used.

“The decision to travel particularly to long and multiple destinations such as the president travelling to France, Belgium, South Africa and back to Ghana especially during this Covid time will always require a larger capacity aircraft such as a DBKJ or an aircraft ATJ 319 even when the Falcon is air ready,” the Defense Minister told Parliament on June 16.

He told the House that regarding the cost incurred on the trip, the Finance Minister is best to provide those details.

Not satisfied with this answer, Mr Ablakwa filed another question to summon the Finance Minister to speak to the cost.

Ken Ofori-Atta appeared before Parliament and noted that questions on the cost and travels of the president will be best answered by the National Security Ministry.

Although the nation is yet to be provided with answers regarding the cost, the former Deputy Education Minister is making another allegation.

On Tuesday, the North Tongu lawmaker, in a post on his Facebook page, called for a national policy on presidential travels akin to what pertains in other jurisdictions.

“For his recent travels to the UK on the 27th of July, 2021, to attend the Global Education Summit and last week’s state visit to Germany, he blatantly refused to travel on the presidential jet.

“Instead, he opted for another top of the range VIP luxury charter jet specifically known to industry players as the Boeing 737-900ER BBJ3,” he alleged.

According to him, the Luxembourg-based aircraft is registered LX-DIO and operated by Global Jet Luxembourg. Its Manufacturer Serial Number (MSN) is 62515 with Line Number 5659.

“The 19-seater luxury jet, which has a HEX code 4D0213 is configured VIP, has 2x CFMI engines and was delivered to the current operators in November, 2015.

“Very few luxury jets boast of its features. Its manufacturers say the cabin is divided into multiple sections to guarantee exceptional comfort. It provides a VIP lounge for relaxation, Five-Star dining facilities, Royal Master bedroom, Cinema Room, specially delineated for watching movies, which is a separate accessory from other in-flight entertainment systems, and of course, just as you predicted correctly, complete with a luxury shower (apparently, the sky bath continues unabated – all royalties paid to Defence Minister, Nitiwul).

“Using the conservative rate of $14,000 per hour, the two trips to the UK and Germany which require some 28 hours of travel distance in and out plus an additional 13 hours of pick up and drop off time, the taxpayer has been burdened again to the colossal tune of $574,000. At the current exchange rate, that is a staggering GH¢3.46 million,” the Facebook post read.

DISCLAIMER: The Views, Comments, Opinions, Contributions and Statements made by Readers and Contributors on this platform do not necessarily represent the views or policy of Multimedia Group Limited.
Tags:
Akufo-Addo travel
Presidential jet