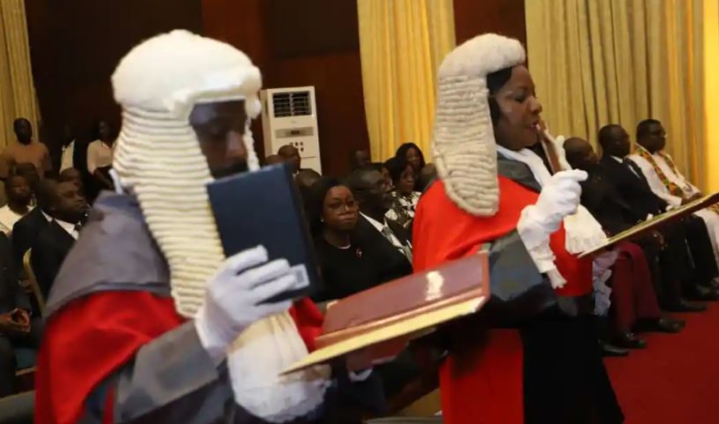 President Nana Addo Dankwa Akufo-Addo on Wednesday swore into office two newly appointed Supreme Court Judges, charging the duo to help strengthen the development of the nation’s constitutional and other jurisprudence in the apex court.

The two underwent a rigorous nomination and confirmation process initiated by the Judicial Council, undertaken in consultation with the Council of State, with the approval of Parliament.

At a brief ceremony at the Jubilee House, Accra, President Akufo-Addo congratulated the judges on their “well-deserved and merited” appointments.

He noted that they had met the stringent requirements of Article 128 clause (4) of the Constitution, and had demonstrated the independence of spirit, proven integrity, high moral character, and impartiality of mind to hold the high office.

He told the judges that it was imperative that they ensured the strict application of the laws of the land without fear or favour, affection or ill-will, and without recourse to the political, religious, or ethnic affiliations of any citizen of the land.

They must ensure that when anyone breached the law, the law enforcement agencies, including the Judiciary, must ensure the person was dealt with in accordance with the law.

Pointing out that the Supreme Court was central to the execution of all the functions of the Judiciary, President Akufo-Addo noted that the perspective of the judges of the apex court was critical for national development, especially “in these challenging times.”

“Article 129 positions the Supreme Court as the policy court where the far-reaching decisions on our socio-economic development are fashioned in response to the exigencies of the time, the perspective of its judges is thus critical for our national development, especially in these challenging times,” he said.

The President said the situation where judges proffered judgements based on decisions from lower courts and cite them as law, was not acceptable.

“Justices, more so Justices of the Supreme Court, must be learned, know their case law, and ensure their decisions and judgements are properly motivated. It is in this manner that judges contribute to the orderly development of the nation,” he said.

President Akufo-Addo reminded the two judges that the growth of the nation demanded a Judiciary that commanded the respect of the people in their delivery of justice as well as by the comportment of judges.

He was confident that the judges would uphold the concept of equality before the law and distinguish themselves in the work of the Court.

The President noted that all Ghanaians, with their different views and perspectives, must work together to realise the Ghana project.

“All of us, from the Executive, Legislature, Judiciary, public sector, security agencies, private sector, political parties, civil society, professional and trade associations, religious bodies, traditional authorities, honorary citizens have a collective responsibility to work together with their different views and different perspective, for the realization of the Ghana project- a united Ghana, driven by considerations of social justice and solidarity, and governed according to the rule of law, respect for individual liberties, human rights and the principles of democratic accountability.”

Justice Ackah-Ayensu thanked the President for the honour done to her and her colleague, saying, “it is both a privilege and humbling opportunity to serve on the highest court of our land.”

“The enormity of the task ahead is not lost on us… and we are grateful for the trust reposed in us. We assure the people that we shall keep the faith and keep the fidelity to the Constitution and shall remain committed to our judicial oaths, God being our helper.”

DISCLAIMER: The Views, Comments, Opinions, Contributions and Statements made by Readers and Contributors on this platform do not necessarily represent the views or policy of Multimedia Group Limited.
Tags:
Akufo-Addo
Supreme Court