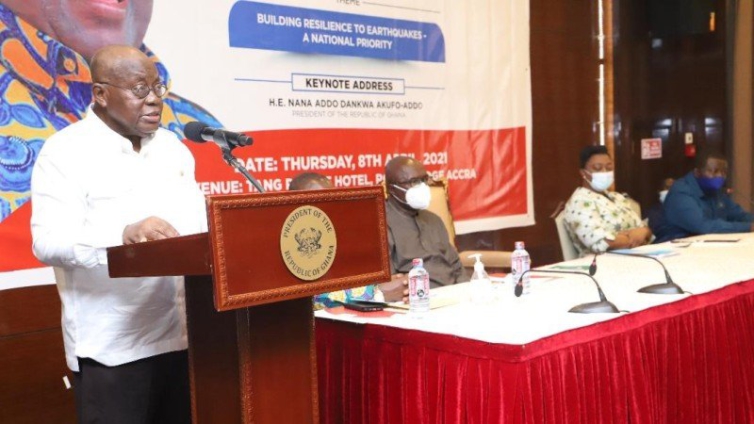 President Akufo-Addo on Thursday asked the Engineering Council of the Ministry of Works and Housing to conduct a comprehensive integrity audit of all public buildings to enable government to effectively plan for earthquakes and other natural disasters.

He has also urged the Ghana Geological Survey Authority to give government the needed advice on its logistical needs and equipment to undertake round the clock monitoring of seismic activities for urgent action.

The President made the call in Accra on Thursday when he opened a stakeholder conference on Ghana’s earthquake preparedness and response.

The meeting was organised by the Ministry of the Interior on the theme: “Building Resilience to Earthquakes – A National Priority.”

It is to deliberate on the Report of a ten-member Committee set up in 2019 by the Interior Ministry to draw a framework for refocusing the country’s earthquake preparedness and response.

President Akufo-Addo said with Ghana’s history of seismic activities dating back to 1636, with a destructive one hitting Accra in 1939, in addition to recent tremors in the country, there was the need to ensure losses were reduced in the event of a high magnitude earthquake.

“Knowing what to do in the event of an earthquake is crucial to survival. It is important that all Ghanaians know what to do to remain safe and alive should such an unfortunate event occur in future,” he said.

“We need to ensure that buildings including dwellings, dams and bridges are structurally competent and resilient to earthquakes of a higher magnitude.”

The President assured the conference of government’s commitment to ensuring that the entire citizenry were protected from the effects of earthquakes and other disasters.

“Government has sufficiently demonstrated its determination to make the nation resilient to the effects of disasters and we will continue to equip NADMO (National Disaster Management Organisation) and indeed all response agencies to enhance their operational effectiveness,” he said.

President Akufo-Addo encouraged the NADMO to embark on a sustained national education campaign on the country’s earthquake preparedness and contingency plans with a request for updates on progress made.

He urged the ministers of Works and Housing, and local Government, Decentralization and Rural Development to collaborate with the Ghana Institution of Engineers to develop a scheme that would entail home owners retrofitting their homes to make them resistant to earthquakes.

The scheme would also compel prospective home owners to build in accordance with defined standards.

The President reiterated his directive to the leadership of NADMO to liaise with the Ghana Education Service to incorporate learning themes on protection against earthquakes and other disasters in the curricula of pre-tertiary education.

The report of the ten-member Committee proposes measures to enable Ghana to develop the capacity to cope with and recover from the effect of a major earthquake, with the consideration that those measures do not compromise the ability of the country to develop and place undue financial burden on individuals and the state.

It identifies and outlines the key measures that must be undertaken by relevant agencies to prepare communities for seismic risk and evaluates the capacities of relevant bodies mandated with national response to identify resource gaps.

The report also calls for the retrofitting of existing structures vulnerable to natural disasters to ensure that they are not unduly damaged and requested an update of the Ghana Building Code to include requirements for retrofitting infrastructure.

It prescribes that owners of public buildings, and buildings meant for large numbers of occupants, as well as managers of lifeline structures such as energy, water, ports, bridges/interchanges, and telecommunications infrastructure should carry out detailed assessment of their facilities, together with retrofitting to the required standards within a specified period.

Cities like Accra, Tema, Ho, Cape Coast, Takoradi, as well as important installations in the south of Ghana such as those for communication, water, oil and gas, electricity and some iconic national infrastructure all lie within areas exposed to earthquakes.

Earthquakes hazards in Ghana are generally determined by three main sources, the coastal boundary fault, which lies parallel to its Coast, the Akuapim fault zone made up of a series of faults along the Akuapim Mountain range, and the Ivory Coast fault, which occurs in the South West corner of the country.

Past earthquakes in Ghana and the examination of current conditions by the Ghana Geological Survey Authority (GGSA) have shown that the full range of secondary effects like fires, flooding from broken pipes and dams, tsunamis, landslides/rock falls and liquefaction are all possible from strong ground shaking in the country.

Stakeholders at the conference include the NADMO, National Security, the GGSA, the Land Use and Spatial Planning Authority, the Ghana Health, Ambulance, National Fire and Police services and the Ghana Armed Forces.

DISCLAIMER: The Views, Comments, Opinions, Contributions and Statements made by Readers and Contributors on this platform do not necessarily represent the views or policy of Multimedia Group Limited.
Tags:
Akufo-Addo
Ghana Geological Survey
Ministry of Works and Housing