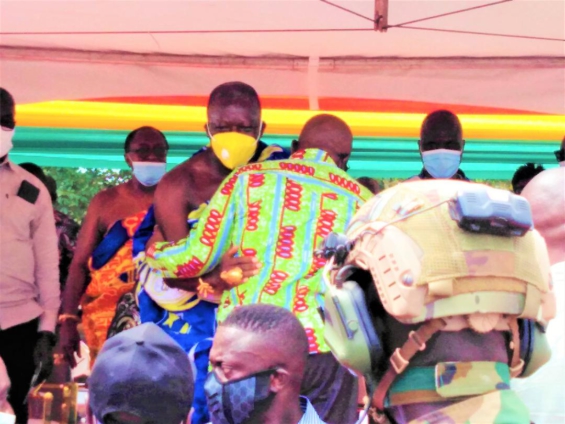 Government has commended the Asantehene, Otumfuo Osei Tutu II, for his selflessness and commitment towards the accelerated socio-economic development of the country.

“Government is grateful to you Asantehene for providing the requisite land resources for the execution of key development projects to benefit the people,” he said.

He cited the release of more than 400 acres of land for construction of the Boankra Integrated Logistics Terminal (BILT), a project estimated to provide about 3,000 direct and 60,000 indirect jobs when completed.

According to him, the Asantehene had over the years provided large tracts of land for educational, health, economic and agricultural purposes, to create employment and wealth for the masses.

Akufo-Addo also indicated that since his ascension to the Golden Stool in 1999, the king has worked tirelessly in partnering successive governments to promote the welfare of the citizenry and also assist to bolster peace-building and strengthening of the chieftaincy institution.

Speaking at the inauguration of the Osei Tutu II estate in Asokore-Mampong, the flagbearer of the New Patriotic Party (NPP), said the government would continue to work with the Manhyia Palace for the progress of the nation.

The estate is gated community with 91 blocks, comprising more than 1000 housing units.

The various blocks at the Estate were named using Adinkra symbols to reflect the unique culture and traditions of the Asante Kingdom, and set within a well-landscaped environment.

Mr Akufo-Addo noted that the completion of the facility, whose construction was stalled for many years, was an attestation of the government’s unalloyed commitment to deliver on its promises to make life better for the people.

Projects inaugurated by the President included the Obuasi Campus of the Kwame Nkrumah University of Science and Technology (KNUST), which has the Asantehene as Chancellor, as well as the 120-bed capacity Bekwai Municipal Hospital.

Others are a 450-bed capacity dormitory each for the Fomena T.I. Ahmadiyya and Asare Bediako Senior High Schools (SHSs), and a launch of the New Edubiase Rural Telephony Project.