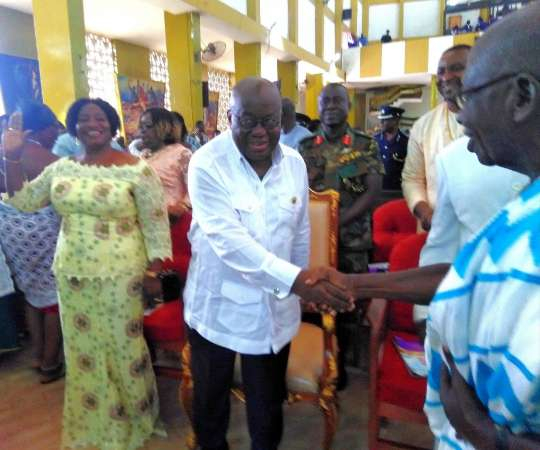 President Nana Akufo-Addo has led a congregation of the Anglican faithful to pray for Ghana’s development and growth, at a ceremony in Kumasi.

Accompanying the President was the Ashanti Regional Minister, Simon Osei-Mensah and his Deputy, Elizabeth Agyemang, as well as Members of Parliament (MPs) and heads of the security agencies.

“Strengthening the Anglican Faith: the Role of St. Cyprian’s Cathedral”, was the theme for the solemn occasion, which saw the gathering praying fervently for the nation’s unity and peace.

The congregation took turns to ask of God’s favour and help for the realisation of the aspirations of the people within the context of Ghana’s development agenda.

President Akufo-Addo, in a brief address at the St. Cyprian’s Anglican Cathedral at Asem in Kumasi, urged the citizenry not to relent in showing their support for the government as it is working for their welfare.

“You should continue to pray to God to give the Presidency the wisdom, courage and vision to govern Ghana successfully,” he said.

He reiterated his unalloyed commitment to the cause of the people, emphasizing that his government would not initiate any policy or development agenda likely to bring discomfort to the nation’s citizenry, he said.

President Akufo-Addo touching on the recent debate on whether or not the nation intended to adopt the Comprehensive Sexuality Education (SCE) in the curricular for basic schools, said no such agenda was on the government’s mind.

“We have no plans as a government to do anything that contravened the norms and values of the society,” he said.

President Akufo-Addo affirmed his Administration’s resolve to strengthen and continue with the ‘Free Senior High School (SHS)’ programme since it was a major step to building a solid foundation for the nation’s sustainable development.

Most Reverend Professor Daniel Yinkah-Sarfo, Primate and Metropolitan Archbishop of the Anglican Province of West Africa and the Internal Province of Ghana, asked the people to be law-abiding.

They should be disciplined in their respective fields of endeavour for the nation’s accelerated growth.

The President is currently on a nationwide tour to inspect development projects and also interact with the people to share the government’s vision of building a prosperous nation.