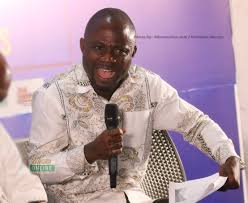 A Ranking Member on Parliament’s Health Committee, Kwabena Mintah Akandoh, has accused President Akufo-Addo of deliberately creating a tense atmosphere to intimidate those who criticise his government.

Speaking in an interview with JoyNews’ Parliamentary Correspondent, Kwesi Parker Wilson, on Friday, the Juaboso MP expressed dissatisfaction with the arrest of some individuals over the past two weeks.

According to him, it is evidence of Akufo-Addo liking for tension, which former President Kufuor warned Ghanaians about.

Citing the arrest of Accra FM’s presenter, Kwabena Bobie Ansah, on Thursday evening, the aggrieved legislator said the unjustifiable arrests is an obvious attack on press freedom, which must be spoken against.

“This is highly unacceptable. It’s avoidable. And I think that the country’s president takes delight in creating tensions in this country. When he was the opposition leader or was in opposition, he made a lot of unsubstantiated allegations that were found to be false, but nobody arrested him. This selective justice we are doing to ourselves will cause more harm to the democracy of this country.

“So almost every time, avoidable tensions. For me, it’s a clear attack on press freedom and let me also tell my brothers and sisters and colleagues in the press fraternity that yesterday it was Oheneba Boamah. ASEPA has followed. Now Bobie Ansah. If you don’t speak out and you think that it is because you have not been attacked, tomorrow it will be your turn, and nobody will be there to speak for you”, Mintah Akandoh stated.

In expressing his grievances, the MP also criticised the way Bobie Ansah was reportedly whisked away at the premises of the radio station where he works.

Mintah Akandoh said there have been many incidents where people have publicised false information without being arrested, and therefore, he does not understand why only a few individuals will be singled out and targeted.

“Talk about the ASEPA guy; what has he done? False publication. When the person has submitted himself to the Police. He goes to court in handcuffs. Look at this Oheneba Boamah one. That when there’s clear evidence to the effect that somebody else said he’s alleged to have said or what he has been sentenced to have said. All these things are available.

“How can we live in a country like that? When on several occasions, we have heard false publications about individuals or high personalities in our country. I’ll give you a typical example. You remember when he said we had taken so much to print diaries. You remember the quotation he gave with respect to the Kasoa interchange and all. They were all false publications.

“In fact, let me even give you a typical example of even within this week. Haven’t you heard that the chief whip for the majority claimed that the minority baked cake for the birthday of the majority leader? The majority leader himself has come out to clarify the air, and he has stated that the person is a media personality and a business mogul. These are all false publications. So who has arrested him?

“What didn’t Owusu Bempah do? The one they call prophet. What did he say about former President Mahama? That he was planning to assassinate whoever. I mean, all these things have come up. And even Kofi Adams. The Member of Parliament for Buem. What has come of that?” he quizzed.

He, therefore, tasked the president’s advisors to offer him the necessary advice to reverse the trend of arrests, which the MP believes are unsubstantiated.

“So I think that the people around the President mist advise the president. Because almost everything that was said about him is coming to pass. You remember when President Kufour said that we shouldn’t vote for anybody who’s full-on tension? Since 2017. Since this man became the president of the Republic of Ghana, tell me one single week that there has not been tension in this country? One single week, tell me,” he stated.

Meanwhile, the Police have explained that the Accra FM presenter was arrested on Thursday night over an alleged publication of false news and offensive conduct.

They further stated that the Accra Regional Police Command will issue a full statement on the matter in due course. The producer of the Citizen Show, which the presenter hosts, said Mr Kwabena Bobbie Ansah was picked up by persons purported to be National Security operatives on Thursday.

Until Friday Morning, it was unclear what occasioned the arrest which ensued around the radio station’s premises after his political talk show ended at about 10 pm. Sources said the journalist was sent to the Nima Police Station after his arrest.

Some supporters of the opposition National Democratic Congress (NDC) had massed up at the Police station demanding that the journalist be released.

Joy News’ checks revealed that he was later moved to the Police Headquarters in Accra. His arrest brings to three the number of journalists arrested by security officials this year.