Akufo-Addo requests IEA to reschedule encounter in honour of Mills 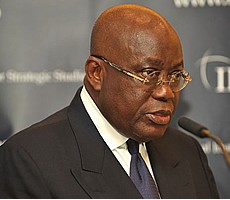 According to a statement issued from the office of the NPP flag bearer, this has become necessary due to the death of Prof. Evans Atta Mills on Tuesday.

The NPP flag bearer requested that the encounter be rescheduled until after the President is buried.

Nana Akufo-Addo had earlier on in the week called-off his Hope Restoration Tour in Evalue-Gwira of the Western Region following President Mills’ death.

The funeral of the late President Mills has been slated for August 8-10 in Accra.

He is expected be buried at the Flagstaff House, Accra on August 10.