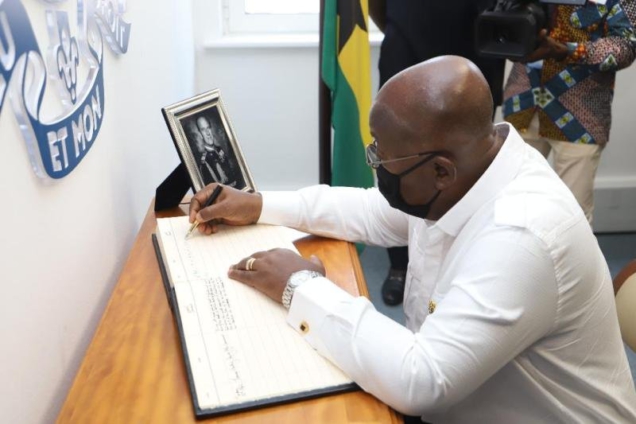 President Nana Addo Dankwa Akufo-Addo Wednesday signed the Book of Condolence for Prince Philip, the Duke of Edinburgh, opened at the British High Commission in Accra.

Prince Philip, husband to Queen Elizabeth II of the United Kingdom, and the longest-serving royal consort in British history died in Windsor Castle at age 99 on April 9, 2021, two months before his 100th birthday.

“We were all very sad in Ghana to learn of the passing of Prince Philip, the Duke of Edinburgh…He has many admirers in Ghana who have vivid memories of his visit to our country,” President Akufo-Addo wrote.

“We appreciate very much the works of his body, the Duke of Edinburgh Awards Scheme, which has benefited hundreds of thousands of Ghanaians.”

“We express our deep condolences to Queen Elizabeth II, in her period of mourning and loss. We pray for God’s strength for her, her children and family, and also ask for God’s blessing in this period. May his soul rest in peace.”

Prince Philip was born into Greek and Danish royal families in 1921 on the Greek island of Corfu. His family left Greece when Philip was a year old after the end of the Greco-Turkish War.

He spent his childhood in France and Germany and later moved to Britain, joined the Navy in 1939 during, which time he met the then Princess Elizabeth and got married to her in 1947, prior to her ascension to the throne in 1952.

The Prince renounced his Greek royal title and became a British citizen. He was given the title His Royal Highness and named the Duke of Edinburgh by the Queen’s father, King George VI, in respect of their marriage.

Philip retired from active naval service in 1951 and was made a British prince in 1957. Since then, he had been the queen’s consort, where he supported her in her role as the reigning monarch and also invested his time in supporting conservation and engineering organisations.

He was a patron, president or a member of more than 750 organisations. He retired from public duties in 2017.

The couple had four children – Charles, Prince of Wales, Anne, Princess Royal, Prince Andrew, Duke of York, and Prince Edward, Earl of Wessex. They had eight grandchildren and 10 great-grandchildren.

DISCLAIMER: The Views, Comments, Opinions, Contributions and Statements made by Readers and Contributors on this platform do not necessarily represent the views or policy of Multimedia Group Limited.
Tags:
Akufo-Addo
Book of Condolence
Prince Philip