Akufo-Addo thanks organised labour for agreeing to 15% COLA 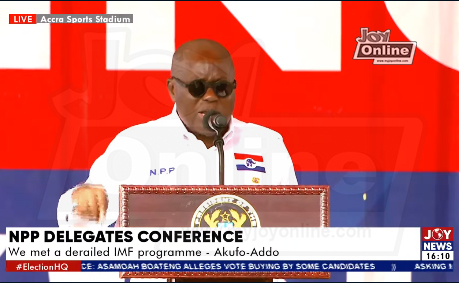 President Akufo-Addo has expressed gratitude to the organised labour unions for agreeing to the 15% Cost of Living Allowance (COLA) offered by the government.

Speaking at the New Patriotic Party’s National Delegates Conference in Accra, the President said the agreement vindicates his government’s concern for the welfare of labour.

“The agreement was in the national interest of Ghana that we should go forward to confront the difficulties of our country without divisiveness of strikes and the confusions that it will bring. So I want to say a big thank you to organised labour for reaching this agreement. Because it has demonstrated also, the concern that our party has always had and will continue to have for the concerns of the working people of Ghana,” he said.

On Thursday, labour unions and government agreed on a 15% Cost of Living Allowance to be paid to all public sector workers to take retrospective effect from July 1, 2022.

This was after almost a week’s strike by four teacher unions, amid threats by others to follow suit.

With this agreement, all planned industrial actions have been suspended immediately.

“The Cost of Living Allowance (COLA) will be paid at a rate of 15 percent of base pay. That the effective date of the payment of COLA is 1st July 2022, ” Employment and Labour Relations Minister, Ignatius Baffuor Awuah announced at a press briefing on Thursday.

The meeting was the third of its kind since labour unions began their demand for COLA. The delegation from the government side was the Minister for National Security, Albert Kan-Dapaah, Minister for Education, Dr Yaw Adutwum, Minister for Employment and Labour Relations, Ignatius Baffler Awuah and Finance Minister, Ken Ofori Attah together with his Deputy Abena Osei Asare.

Earlier on Tuesday, a meeting between both parties was adjourned due to the refusal of some labour unions to call off their strike before negotiations commence.

“We have had to adjourn the meeting because both parties; labour and government think that we cannot do this while a party is on strike, so the agreement is that we are going off to talk to each other. They call off the strike and we come again to meet,” Deputy Minister of Employment and Labour Relations, Bright Wereko-Brobbey told Joy News.

DISCLAIMER: The Views, Comments, Opinions, Contributions and Statements made by Readers and Contributors on this platform do not necessarily represent the views or policy of Multimedia Group Limited.
Tags:
Akufo-Addo
COLA strike
Cost of Living Allowance (COLA)
Labour Unions