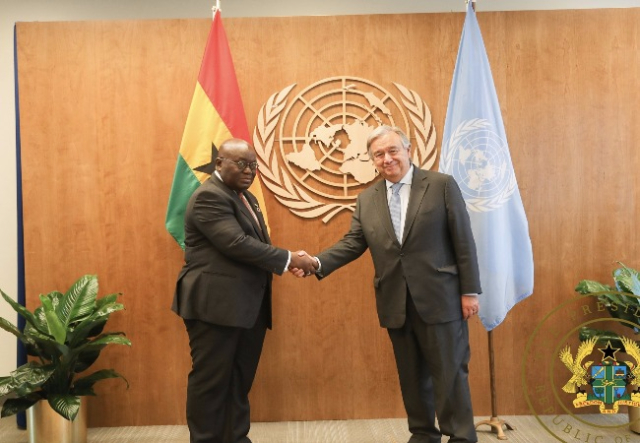 President Nana Akufo-Addo has met with the United Nations Secretary-General, Antonio Guterres in New York to discuss the challenges of terrorism and violent extremism.

The two leaders exchanged views on the situation in Ghana and the sub-region.

There have been calls for President Akufo-Addo to intervene in the recent political standoff in neighboring Togo which has led to some protesters dead and with dozens injured.

The protesters want a restoration of the 1992 Constitution which prescribes a tenure of office of a sitting president.

Commenting on the issue, Samuel Okudzeto Ablakwa, Member of Parliament for North Tongu who doubles as Ranking Member for Foreign Affairs, said if Ghana does not mediate between the government of Togo and its opposition, the country will not be spared the consequences of a full-blown conflict.

He recounted the incidents of 2005 in which dozens of Togolese fled to Ghana after about 500 Togolese died in a violent protest.

Some West African countries have been hit by terrorists with a Burkina Faso restaurant being the latest to be hit. Eighteen people were killed in the Ouagadougou incident which is the second incident within two years.

There have also been similar attacks in Mali where some lives were lost including tourists.

Mr Gutteres expressed appreciation for President Akufo-Addo’s engagement and commitment as co-chair of the group of 17 eminent Sustainable Development Goals (SDGs) advocates, to the SDGs.

He commended the Ghana for its contribution to the resolution of the post-electoral crisis in The Gambia which saw the exit of Yahya Jammeh after an electoral loss.