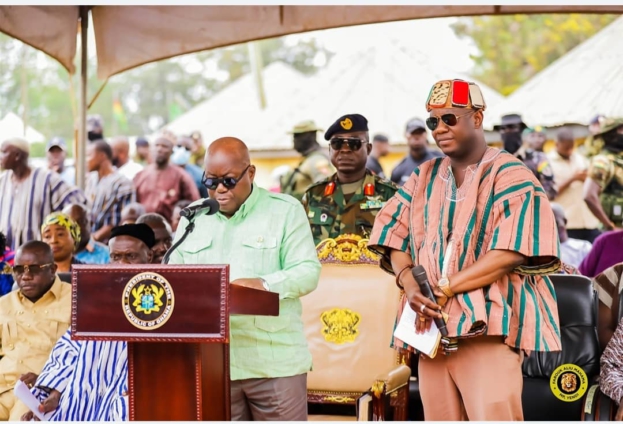 President Akufo-Addo and Ndan Ya-Na Abukari II, King of Dagbon have commended Farouk Aliu Mahama, Member of Parliament (MP) for Yendi for his efforts towards the development of the constituency.

The President and the Dagbon King commended the Member of Parliament for his dynamism and commitment for ensuring the good welfare of the people of the Yendi Constituency.

Mr Aliu Mahama received the commendations at the Gbewaa Palace when the President visited the Palace to pay homage to the Dagbon King to ask for his blessing to begin his two-day tour of the Northern Region.

The President as part of his tour was to cut a sod for the Commencement of the construction of a 2.53 kilometers Yendi Dualisation Town Road which is expected to be completed within seven months.

Ya-Na Abukari II revealed that Alhaji Farouk Aliu Mahama has been greatly intervening by supporting the people of Yendi and its environ with the supply of portable drinking water through the construction of boreholes in many parts of the constituency.

“He also supports the Yendi town residents with water by paying to commercial water tanker suppliers when the need arises at all times”.

The President told the Ya-Na Abukari II that the development that Dagbon is seeing now was a translation of the peace that the Kingdom was enjoying.

Alhaji Farouk Aliu Mahama reiterated that his office as an MP will continue to support the course of the government of President Akufo-Addo to deliver on his mandate.

He said the Yendi City Project initiated by his office was a manifestation of the love he and President Akufo-Addo has for the people of Yendi.

The Member of Parliament assured President Akufo-Addo that his outfit was working towards achieving a 80 per cent win in the 2024 election and that the development of Yendi was a top priority on his agenda.

He thanked President Akufo-Addo, Ya-Na Abukari II and the people of Yendi for their care and support and appealed to them to continue to support him to deliver.