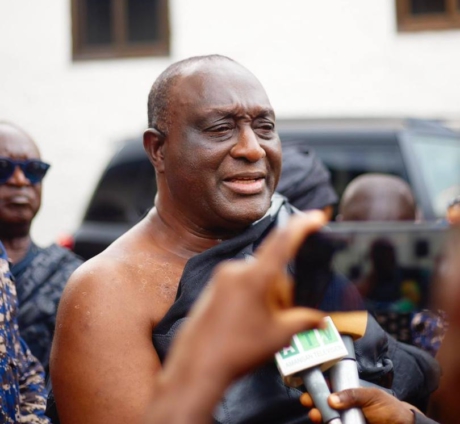 The Minister paid tribute to the memory of the late Omanhene eulogising him as a rare gem whose brilliant work as a statistician went far beyond the borders of Ghana.

Speaking after paying his last respects to the Daasebre at the funeral grounds (Yiadom-Hwedie Palace), Hon Kyerematen spoke about their special bond of friendship and that he benefited from the priceless advice from the late Traditional leader.

The Minister recounted the Government Statistician had been his close confidant since their days together at the University and had always offered him pieces of advice that has spurred him on on his public life.

“Prof. your demise has come as a great shock to me and my family. You have been a pillar behind my academic and professional career and have been a source of inspiration for me. I will ensure that the rich discussions we had over several years about development in Ghana will become a reality. May the good Lord keep you safe in His blossom.”

The programme will be climaxed by Otumfuo Osei Tutu II on the last day.