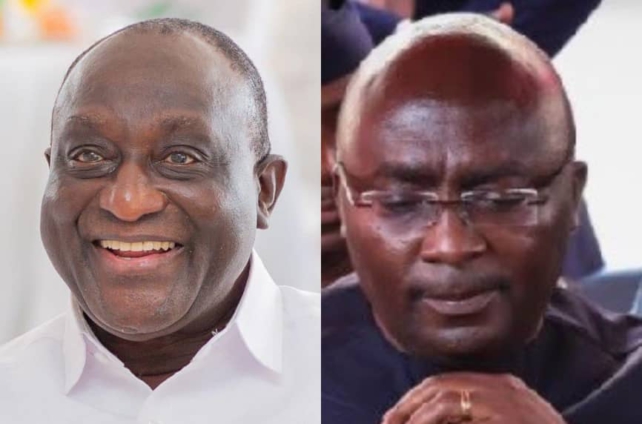 A survey by Global InfoAnalytics has revealed that Trade and Industry Minister, Alan Kwadwo Kyerematen, is the likeliest candidate to lead the New Patriotic Party (NPP) after the party’s upcoming flagbearership contest.

According to the report, Bawumia’s decline in rating during the survey ‘coincides with the country’s worsening economic situation’.

The study also showed that Member of Parliament for Assin Central, Kennedy Agyapong, is another force to reckon with in the NPP’s flagbearership contest.

“A new opinion poll conducted by Global InfoAnalytics for October 2022 shows the Trade and Industry Minister, Alan Kwadwo Kyerematen (AKK) continues to expand his lead over his closest rival Dr Mahamudu Bawumia (DMB) in the race to lead the NPP as the country’s economic crisis deepens.

The poll shows AKK is the preferred candidate of general voters to lead the NPP in 2024. AKK now leads DMB, 44% to 31%. Kennedy Ohene Agyapong, MP (KOA) came third with 14% of the votes”, a summary of the report stated.

This revelation comes at a time when the Vice President is reportedly lacing his boots to lead the NPP in the party’s quest to ‘break the eight’.

Dr. Bawumia’s alleged interest in leading the party add to the list of other party stalwarts who believe they have what it takes to captain the party to victory in 2024.

In this regard, prominent personalities such as Joe Ghartey and former NPP General Secretary, Kwabena Agyapong are all reported to be aiming for the flagbearership spot.

Former Energy Minister, Boakye Agyarko is also among the NPP bigwigs who want to the take the baton from President Akufo-Addo after the end of his tenure.

The leadership of the party has however placed an embargo on all campaign activities until such a time when the party shall instruct aspirants to officially launch their respective campaigns.

Meanwhile, 70% of eligible voters doubt the ability of the New Patriotic Party (NPP) to win the 2024 general elections.

In InfoAnalytic’s October 2022 report, majority of Ghanaians ruled out the possibility of the NPP ‘breaking the eight’.

“On the question of whether the the NPP can ‘Break the Eight’, approximately 70% of voters do not believe the NPP can win the 2024 election, whilst 19% believe so and 10% have no opinion”, the report said.

The indication of doom for the ruling New Patriotic Party in the 2024 general elections comes at a time when scores of Ghanaians are embittered about the declining state of the economy.

The widespread agitations have taken the form of social media trolls, jabs and hostile remarks, all directed at President Akufo-Addo and Vice President Dr. Mahamudu Bawumia.

Some of the enraged critics say President Akufo-Addo rode on the back of lies and flowery speeches to become President, knowing he had no good thoughts for the country.

But reacting to some of these concerns, the President, in an interview on Monday stated that he is not frightened by the threats from some Ghanaians to boot the NPP out of office in 2024.

According to him, such threats are part of the politics and therefore he is not perturbed.

Meanwhile concerning the ailing economy, government says it is still in talks with the International Monetary Fund (IMF) to devise effective policies to rescue the country from its present woes.