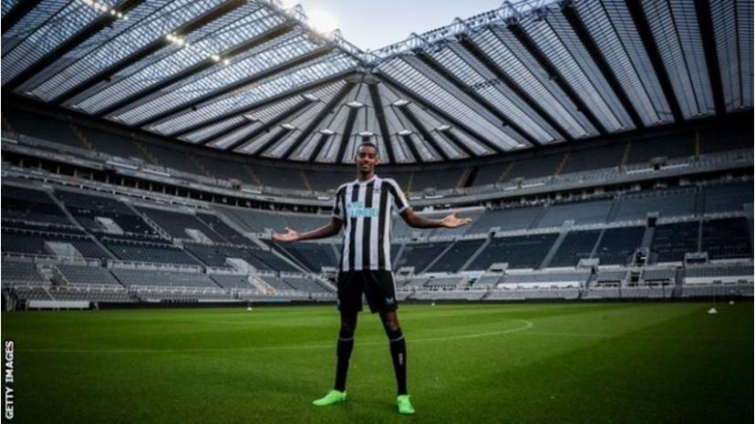 Isak will wear the number 14 shirt for Newcastle

Newcastle have signed Sweden striker Alexander Isak from Real Sociedad on a long-term deal understood to be worth about £60m.

The 22-year-old becomes the Magpies’ fourth signing of the summer after Matt Targett, Nick Pope and Sven Botman.

Isak scored 44 goals in 132 appearances for Sociedad, and has nine in 37 caps for his country.

“It was a big, big decision for me but it is a decision I am really happy with,” he said.

“It is a great, historical club that I think anyone would like to play for, with amazing fans. They were a big part of why I came here – and also the club’s project, which is one that I really believe in.

“You always want to go into a team and know how they play. I think Newcastle play very attractive football and I want to be a part of that.”

Ex-Borussia Dortmund player Isak’s arrival at St James’ Park boosts Newcastle’s attacking options given the injury record of Callum Wilson, who is currently out with a hamstring strain.

Newcastle boss Eddie Howe said: “I’m very excited that Alexander has chosen to join us. He is an outstanding talent who is capable of making a big contribution to the team.

“He is technically very good, with a mix of attributes that will complement us, but he is also at a great age to grow with this club.

“I want to thank the club’s owners and transfer committee for bringing Alexander to Newcastle. We are all delighted to have him on board.”

Earlier on Friday, Howe said Wilson’s hamstring injury was “not serious” but the 30-year-old striker will be out “for a couple of weeks”.

Howe also said he did not think Newcastle goalkeeper Martin Dubravka was in talks with Manchester United over a move.

Reports have linked the Slovakian with a move to Old Trafford after he was displaced as club number one by Nick Pope.

“I don’t think he’s in talks with Manchester United,” said Howe. “There has been contact between the clubs, but that will be something that will continue probably, to happen, as in the discussions.

“But in terms of an actual final outcome, I’m very reluctant to lose any important players to the group, so that’s a decision that will be out of my hands.”

DISCLAIMER: The Views, Comments, Opinions, Contributions and Statements made by Readers and Contributors on this platform do not necessarily represent the views or policy of Multimedia Group Limited.
Tags:
Alexander Isak
Newcastle United
Real Sociedad
Sweden striker