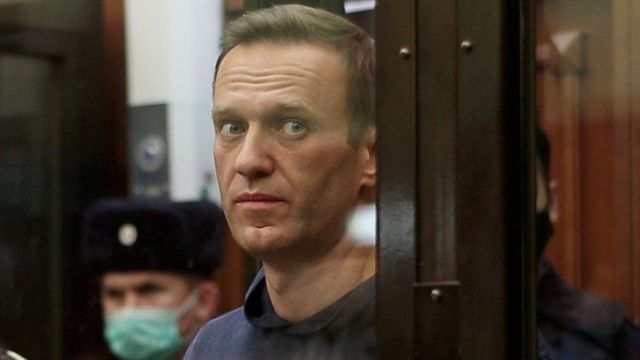 The US has announced sanctions on Russians over the poisoning of opposition leader Alexei Navalny.

They said US intelligence had concluded that the Russian government was behind the near-fatal nerve agent attack on Mr Navalny in Siberia last year.

He is the most prominent critic of President Vladimir Putin.

While in a coma after the poisoning, Navalny was airlifted to Germany, where he recovered. He returned to Russia in January and was arrested on arrival.

Moscow denies involvement and disputes the conclusion, by Western weapons experts, that the nerve agent Novichok was used.

A court last month found that Navalny had violated the terms of his probation over an earlier embezzlement case, and imposed a prison sentence.

Speaking to reporters during a conference call, the US officials said the measures were being co-ordinated with the European Union, which is expected to announce similar steps.

They are the first sanctions imposed on Russia by the administration of President Joe Biden. He has taken a tougher stance than his predecessor Donald Trump towards President Putin.

After phoning his Russian counterpart last month, Mr Biden said he had made it clear the days of the US “rolling over in the face of Russia’s aggressive actions, interfering with our elections, cyber-attacks, poisoning citizens are over”.

DISCLAIMER: The Views, Comments, Opinions, Contributions and Statements made by Readers and Contributors on this platform do not necessarily represent the views or policy of Multimedia Group Limited.
Tags:
Alexei Navalny
Russians
Sanctions
US