All is set for implosion of Hong-Kong building at Makola 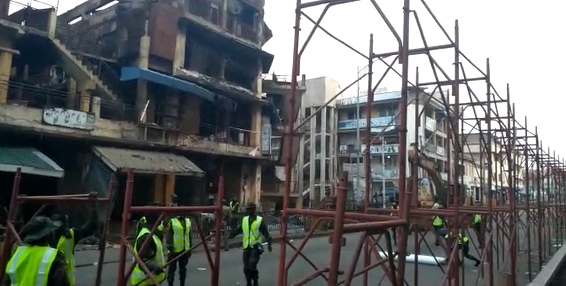 All is set for the implosion of the Hong-Kong Market building that got burnt at Makola in the Central Business District of Accra.

Officers of the 48 Engineer Regiment of the Ghana Armed Forces have cordoned off the area ahead of the exercise.

Scaffolds and excavators are positioned in readiness for the demolition scheduled for today.

The exercise follows the technical team’s recommendation, which investigated the July 5, fire that the building had become weak and its integrity had been compromised.

The three-storey building will be pulled down completely as recommended by a committee tasked by the Accra Metropolitan Assembly to investigate the fire incident.

The committee found that the building had become weak and compromised.

It established that a generator set started the fire that engulfed a bigger part of the building and destroyed items worth thousands of Ghana cedis.

The committee also found that there were naked and haphazardly exposed wires in the building with bad electrical wiring, especially by unprofessional electricians, as well as the use of substandard materials.

It took fire fighting officers several days to extinguish the inferno, amid criticisms from some traders and members of the public, who were frustrated with the situation.

The Committee said, though the Ghana Water Company Limited reported of available water supply in the area, the Ghana National Fire Service (GNFS) said due to the low pressure of the water, they had to go to the Kwame Nkrumah Circle and adjoining areas to access water, which affected the firefighting exercise.