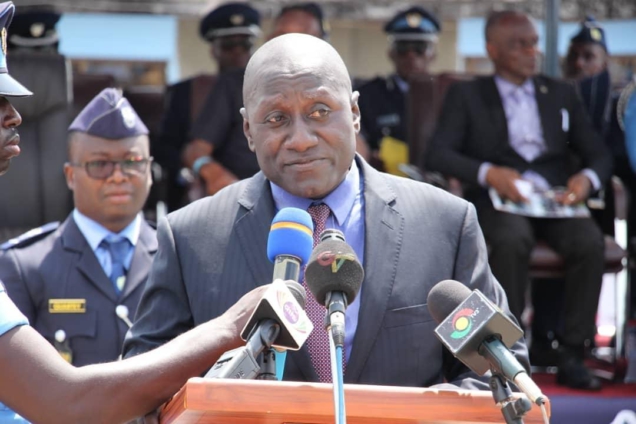 In October 2021, then Deputy National Security Coordinator, Edward Asomani wrote a letter to the Commissioner-General of the Ghana Revenue Authority (GRA).

It was to report a disturbing development as he wanted an allegation of Tax evasion investigated.

A Customs Intelligence team is said to have intercepted and arrested two cargo trucks at the Dzorwulu Traffic Light on suspicion of under declaration and misdescription of goods.

The Trucks were escorted to the Customs Laboratory Division at Airport Roundabout for re-examination.

This exercise according to Mr. Asomani revealed that a substantial number of goods in the truck were undeclared and thus, no duties were paid on them. A list of the declared and undeclared goods was attached to this letter.

Mr. Asomani also pointed out that one of the arrested traders alleged he had placed a call to Col. Kwadwo Damoah (Rtd) Commissioner of CD-GRA. One Johnny Agbawu who led the arrest operation is said to have received a call from one Kojo Bonsu, Staff Officer to Col Damoah asking him to unconditionally release the trucks.

“Given the implications of this development, particularly those related to tax evasion, on the domestic revenue mobilization efforts of GRA, your outfit is urged to investigate the matter and update this Ministry accordingly,” Mr. Asomani wrote.

The GRA commenced investigations into the matter and took responses from its officials including Col. Damoah.

The Customs boss dismissed the allegations. He insisted he never received any call from any individual on the said day. He further pointed out that he did not ask anyone to make any call.

“I had no information about the arrest for which I am wrongly accused of wrongdoing. It is quite unfortunate that such serious unfounded, unsubstantiated, frivolous and vexatious allegations could be made against me by a person bent on destroying my hard-won reputation of over thirty years of public service,” he wrote.

Col Damoah continued that on the said day, he travelled to Akanu-Noepe with the Honourable Minister for Foreign Affairs and Thomas Mbomba (MP) on same to meet with a Togolese delegation and the Commissioner for Infrastructure of the ECOWAS Commission for a Ministerial Meeting on the Operationalization of the Akanu-Noepe Joint Border Post (JBP).

The Customs Boss said he headed to the Aflao Border post from this location.

“We left Aflao after 7pm on that fateful day and arrived in Accra at about 10pm.I wish to reiterate that I did not receive any call from the so-called importer associated with the arrest of the said two cargo trucks and I anxiously welcome any further investigations into the matter,” he stated.

John Agbawu who led the intelligence team to effect the arrest of the traders was engaged as well. He indicated that upon effecting the arrest, the owner of the truck placed a phone call and brought the phone to him to talk to someone allegedly from the Commissioner of Customs’ office.

He however refused to do so. The phone he recounted was brought a second time and this time around he was told someone called Kojo Bonsu wanted to talk to him.

Mr. Agbawu said he did not take the phone again.

“The third time she said Kojo Bonsu said i should release the truck to go. At this point I ordered the truck driver to move the truck to K.I.A barracks for further action. I personally boarded the leading truck. On our way to K.I.A between Tema toll booth and Tetteh Quashie roundabout. I received a call from this number (##########) a lady claiming to be a Customs Officer ordering me to release the truck or face the consequences.

“After a couple of minutes, the driver received a call and because he was driving placed it on loud speaker, I heard a male voice ordering the driver not to obey by sending the truck to K.I.A. barracks but to make sure he run-away with the truck.

“At this point, I called a Police Officer who was with us earlier but left due to writing of his promotional exam for assistance. At the Tetteh Quarshie roundabout, I asked the driver to follow the road that leads to K.I.A barracks but he ignored me and sped off towards Abeka-Lapas between Tettehquarshie and Dzorwulu traffic light, the driver stopped and asked me to alight for some boys in the vehicle to get down.

“Immediately I got down for the boys to alight, the owners of the goods who were following the truck in a private car pushed me unexpectedly and the truck driver sped off. I quickly stopped a taxi and asked the driver to chase the truck and caught up with the truck at Dzorwulu traffic light.

“There I sought the assistance from the Motor Traffic and Transport Department (MTTD) Police Officers who helped me to stop the truck.

The owner of the truck named Nana Ama and two other women with her started shouting that drew the attention of the crowd including Officers from the National Intelligence Bureau. They mentioned Kojo Bonsu and some Officer’s name that this Officer called me to release the truck to them but I refused, so they will not allow me to take the truck to K.I.A barracks.

Commissioner General of the Ghana Revenue Authority Rev. Ammishaddai Owusu-Amoah wrote back to Mr. Asomani to brief him on the probe.

“All the officers denied that they made or received calls from any importer whatsoever on that day. It is instructive to note that the commissioner customs in his response vehemently denied the said allegations.

Any further development would be communicated to you”, the GRA Boss stated.

DISCLAIMER: The Views, Comments, Opinions, Contributions and Statements made by Readers and Contributors on this platform do not necessarily represent the views or policy of Multimedia Group Limited.
Tags:
Col Kwadwo Damoah
Customs
GRA
Tax evasion