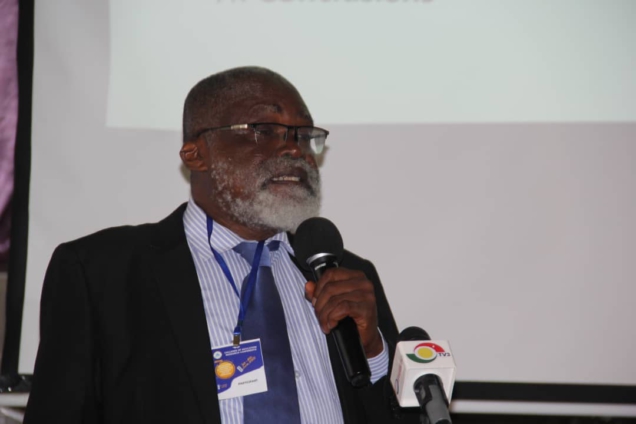 Professor of Geography and Rural Development at the Kwame Nkrumah University of Science and Technology (KNUST), Professor Daniel Buor

A Professor of Geography and Rural Development at the Kwame Nkrumah University of Science and Technology (KNUST), Professor Daniel Buor has called for a major percentage of the government’s Appiatse Development Fund be devoted to the education of vulnerable children.

According to him, despite the increased number of children affected by disasters, humanitarian aid for education nearly halved between 2010 and 2015, creating an annual funding gap of $8.5 billion, said Prof Buor.

He therefore recommended that, “The government of Ghana has set up Appiate Development Fund to mobilise financial support for the development of the shattered community. It is hoped a significant portion of the fund shall be allocated to the education of vulnerable children”.

Professor Bour made the suggestion at a research conference of the Colleges of Education and Social Education Research at Nsuta in the Ashanti region.

In his opinion, there are still teething problems in dealing with post-emergency situations; adding that, humanitarian aid during calamities has been insufficient.

At the conference, Professor Bour further stated that despite calamities in various areas around the country, children are driven to learn, citing an 8-year-old boy named Kwesi who survived the Appiate disaster and is anxious to return to school.

According to him, when UNICEF representatives questioned Kwesi’s education, he answered, “I want to go back to school and see how well I did during the exam”.

As a result, UNICEF gave school supplies to assist the victims in continuing their education in their temporary housing.

Despite efforts by government and humanitarian organizations to address issues of education for children and youth during calamities, there are still obstacles to overcome.

According to the Robert Strauss Centre for International Security and Law, almost 500 million school-aged children reside in countries where continuing catastrophes are present. Also 75 million children and teenagers had their education disrupted, had poor-quality education, or dropped out entirely in 2017.

The conference was therefore designed to offer thought leadership within the teacher education community and foster education development partnership between government, CSOs in education, and academia.

It brought together scholars, practitioners, policymakers and government officials in the country to discuss educational advancements.

About 310 researchers, practitioners, policy makers and CSOs are attending the 2-day event.