AMA embarks on clean-up and enforcement exercise at Agbogbloshie - MyJoyOnline.com

AMA embarks on clean-up and enforcement exercise at Agbogbloshie 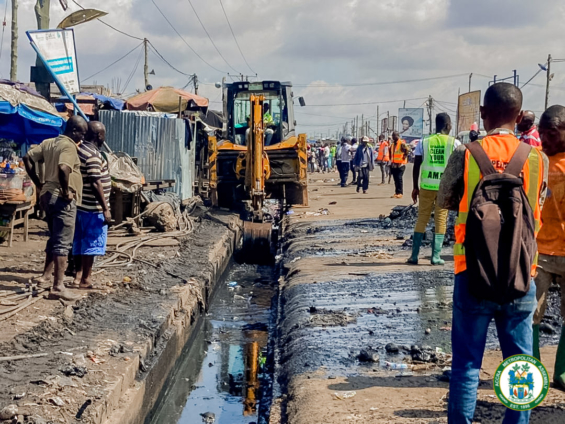 The Accra Metropolitan Assembly (AMA) has embarked on a massive clean-up and enforcement exercise at the Agbogbloshie market to maintain sanity within the environment.

The exercise which began in the early hours of last Thursday through to Sunday was aimed at desilting choked gutters in the market, relocating traders who sell along the road, clearing vehicles parked on the shoulders of the road as well as prosecuting offenders who fail to adhere to Assembly bye-laws.

Addressing the media, Chief Executive of the AMA, Elizabeth Kwatsoe Tawiah Sackey expressed disappointment over the state of the market and noted that the decongestion exercise would not be a nine-day wonder but would be a continuous exercise that would be carried out frequently till sanity was maintained at the Agbogbloshie market.

“It’s very appalling when you see our market places looking dirty, while the market is mostly occupied by the women who are supposed to be keepers of the home and rather this is where we find ourselves today, however, we won’t leave this place unattended to after tidying up.

“We will let our patrol team monitor this area, from time to time and also send some of our task force to stand at vantage points to check, mind you if you are found wanting, then the law will deal with you as it should,” she said.

She also cautioned traders as well as commuters in the Agbogbloshie market area against indiscriminate dumping of refuse into drains.

Again, she advised traders who sell along the road and occupy illegal spaces in the market area to relocate to the demarcated areas allotted to them by the Assembly to ease unnecessary decongestion in the market.

“This is very heartbreaking, as it stands now we have seized about 20 vehicles which offload goods and pack along the road, which contributes to traffic, all these human activities contribute to uncomfortable living situations and that is why I have warned against selling on the shoulders of the road…we need to be each other’s keeper and as such I want to call on the traders to help us achieve the goal of keeping our markets clean,” she noted.

However, the Mayor of Accra, Elizabeth Kwatsoe Tawiah Sackey called on the Ghana Water Company to remove all pipelines laid in gutters at the Agbogbloshie market area as soon as possible as she believes the pipelines in the drains contribute to siltation which impedes the free flow of water in the drains, causing flooding in the community.

“As you can see, one of the major challenges we are facing with the issue of choked gutters here in Agbogbloshie is the pipelines laid in the gutters, which is why I want to call on the Ghana Water Company for the last time to remove these pipelines as soon as possible to enable free flow of water in the drains and prevent flooding which occurs here in Agbogbloshie,” she added.

Some shops and a public toilet were also closed down and summoned for operating in illegal and unhygienic conditions.