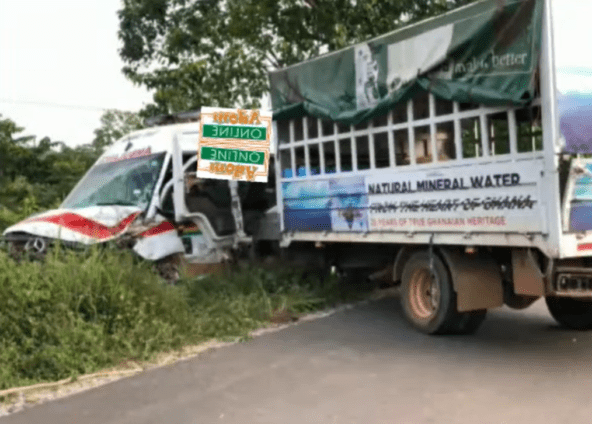 An ambulance conveying a patient to the Komfo Anokye Teaching Hospital (KATH) was involved in an accident at Agyamasu in the Ashanti Region on Wednesday evening.

Adom News’ Isaac Normanyo reports that after the patient, a woman who had suffered burns on her body, had been given first aid, at the Obuasi Government Hospital, the Obuasi East District ambulance was contracted to transport her to KATH.

Due to the seriousness of the injuries, the driver of the ambulance was ordered to head straight to KATH.

But on the way to the hospital, a KIA Rhino, which was engaging in a wrongful overtaking, collided head-on with the ambulance.

The driver of the ambulance, the medics as well as the patient sustained various degrees of injury.

Currently, they are all receiving treatment at the Obuasi Government Hospital, except the woman who was transported to KATH by the Jacobu District ambulance.