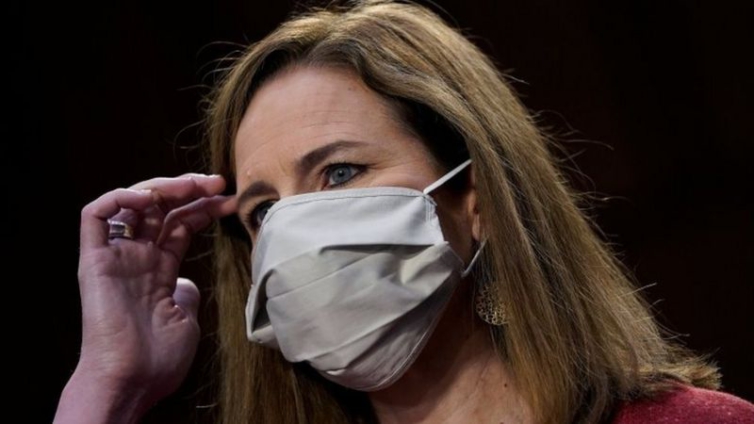 US Supreme Court nominee Amy Coney Barrett faces a grilling by Democrats opposing her nomination, in day two of her Senate confirmation hearing.

They are likely to cast her as a threat to healthcare reforms passed under former President Barack Obama.

The conservative judge said on Monday she was “honoured” to be President Donald Trump’s pick for the top court. Republicans are seeking to approve her nomination ahead of the presidential election in three weeks.

Her confirmation would give the nine-member court a 6-3 conservative majority, altering the ideological balance of the court for potentially decades to come.

She is the proposed replacement for liberal Justice Ruth Bader Ginsburg, who died last month aged 87.

But Republicans have praised Judge Barrett. Senate Judiciary Committee chairman Lindsay Graham on Monday said she belonged in “a category of excellence”.

“This is a vacancy that’s occurred, the tragic loss of a great woman. And we’re going to fill that vacancy with another great woman,” he said. Republicans hold a slim majority in the US Senate, the body that confirms Supreme Court judges, making Judge Barrett’s nomination very likely to pass.

Democrats have criticised the rushed process as “reckless” and a “sham”, amid a coronavirus pandemic that has killed 215,000 people in the US. They have also accused Republicans of hypocrisy.

In March 2016, when Mr Obama, a Democrat, put forward a nominee to fill a spot on the court, the Senate Republicans refused to hold hearings, arguing the decision should not be made in an election year.

What’s in store for Tuesday’s hearing?

Tuesday is the first of two days of direct questioning for Judge Barrett from senators on the deeply divided Senate Judiciary Committee.

It follows day one of hearings on Monday, in which she explained her legal philosophy and qualifications for the lifetime position on America’s top court.

Democratic senators are likely to scrutinise her conservative views and decisions she has delivered as a judge on the Seventh Circuit Court of Appeals.

Much of her record could be seen to be in opposition to the philosophy of the late Justice Ginsburg.

Senator Dianne Feinstein, the top Democrat on the committee, started by asking about abortion.

Questioning whether the nominee agreed with the view that Roe v Wade – the case that led to legalisation of abortion in the US – was “wrongly decided”, Judge Barrett vowed not to “pre-commit” to any view.

“I have an agenda to stick to the rule of law,” she said, stating that she had “no agenda to try to overrule” other decisions. The judge is a devout Catholic but stated on Tuesday that she had “never tried to impose” her personal choices on others, in her personal life or her professional life.

She similarly refused to express her views when questioned about cases concerning LGBTQ rights, arguing that “as a sitting judge, I can’t give answers to those very specific questions”.

Healthcare is also high up the agenda, amid the possibility that she could be a deciding vote to strike down reforms enacted by former President Obama, providing health insurance to millions of Americans.

Senator Feinstein argued on Monday that “Americans stand to lose the benefits that the ACA [Affordable Care Act] provides” if Judge Barrett is on the top court, when it hears a case against the public health insurance scheme next month.

Asked for her opinions on the law on Tuesday, Judge Barrett refused again, arguing that as this case is soon to be heard by the court, “the canons of judicial conduct prohibit me from expressing a view”.

Judge Barrett has in the past criticised a 2012 Supreme Court ruling upholding the ACA. The hearings, lasting four days, are the key step before a full Senate vote on the nomination.

What did Judge Barrett say on Monday?

“I believe Americans of all backgrounds deserve an independent Supreme Court that interprets our constitution and laws as they are written,” the 48-year-old jurist told senators. Judge Barrett argued that elected politicians make “policy decisions and value judgments”, not Supreme Court justices.

“In every case, I have carefully considered the arguments presented by the parties, discussed the issues with my colleagues on the court, and done my utmost to reach the result required by the law, whatever my own preferences might be,” she said.

After the hearings end, any committee member can require an additional week before the formal panel vote on whether to present the nomination for confirmation before the full Senate. It is not clear if the members will be able to vote remotely.

If she passes the committee stage, the full Senate will vote to confirm or reject Judge Barrett’s nomination.Republicans already appear to have the 51 votes needed to get Judge Barrett confirmed.

Senate majority leader Mitch McConnell has vowed to hold a confirmation vote before the presidential election.

Barring a surprise, Democrats seem to have few options to prevent her from gliding through the Senate to the Supreme Court bench.

DISCLAIMER: The Views, Comments, Opinions, Contributions and Statements made by Readers and Contributors on this platform do not necessarily represent the views or policy of Multimedia Group Limited.
Tags:
Amy Coney Barrett
Trump
US Supreme Court