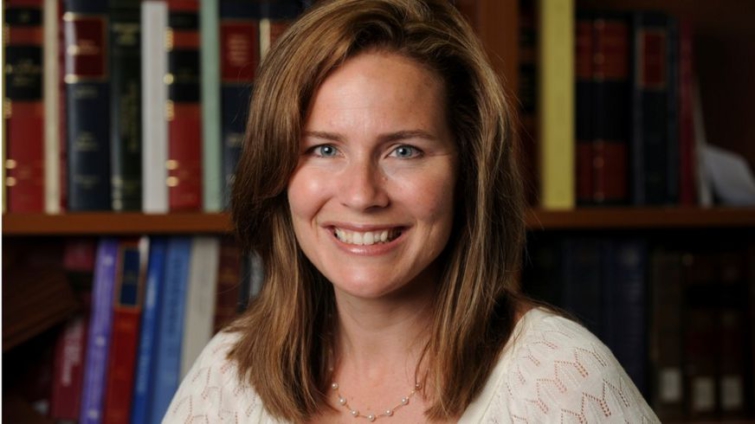 Amy Coney Barrett’s nomination to the US Supreme Court comes as little surprise.

The long-term academic, appeals court judge and mother of seven was the hot favourite for the Supreme Court seat.

Donald Trump – who as sitting president gets to select nominees – reportedly once said he was “saving her” for this moment: when elderly Justice Ruth Bader Ginsburg died and a vacancy on the nine-member court arose.

It took the president just over a week to fast-track the 48-year-old conservative intellectual into the wings. This is his chance to tip the court make-up even further to the right ahead of the presidential election, when he could lose power.

Barrett’s record on gun rights and immigration cases imply she would be as reliable a vote on the right of the court, as Ginsburg was on the left, according to Jonathan Turley, a professor of law at George Washington University.

“Ginsburg maintained one of the most consistent liberal voting records in the history of the court. Barrett has the same consistency and commitment,” he adds. “She is not a work-in-progress like some nominees. She is the ultimate ‘deliverable’ for conservative votes.”

And her vote, alongside a conservative majority, could make the difference for decades ahead, especially on divisive issues such as abortion rights and the Affordable Care Act (the Obama-era health insurance provider).

Barrett’s legal opinions and remarks on abortion and gay marriage have made her popular with the religious right, but earned vehement opposition from liberals.

But as a devout Catholic, she has repeatedly insisted her faith does not compromise her work.

Barrett lives in South Bend, Indiana, with her husband, Jesse, a former federal prosecutor who is now with a private firm. The couple have seven children, including two adopted from Haiti. She is the oldest of seven children herself.

Known for her sharp intellect, she studied at the University of Notre Dame’s Law School, graduating first in her class, and was a clerk to Justice Antonin Scalia, who, in her words, was the “staunchest conservative” on the Supreme Court at the time.

Like her mentor Scalia, she is an originalist, which is a belief that judges should attempt to interpret the words of the Constitution as the authors intended when they were written.

Many liberals oppose that strict approach, saying there must be scope for moving with the times.

Barrett has spent much of her career as a professor at her alma mater, Notre Dame, where she was voted professor of the year multiple times. One of students, Deion Kathawa, who took a class with her earlier this year, told the BBC she was popular because she involved everyone in discussions. He found her “collegial, civil, fair-minded, intellectually sharp, and devoted to the rule of law secured by our Constitution”.

Another student told the WBEZ new site: “I feel somewhat conflicted because … she’s a great professor. She never brought up politics in her classroom… But I do not agree with her ideologies at all. I don’t think she would be good for this country and the Supreme Court.”

Barrett was selected by President Trump to serve as a federal appeals court judge in 2017, sitting on the Seventh Circuit, based in Chicago. She regularly commutes to the court from her home – more than an hour and half away. The South Bend Tribune once carried an interview from a friend saying she was an early riser, getting up between 04:00 and 05:00. “It’s true,” says Paolo Carozza, a professor at Notre Dame. “I see her at the gym shortly after then.”

Carozza has watched Barrett go from student to teacher to leading judge, and speaks about her effusively. “It’s a small, tight-knit community, so I know her socially too. She is ordinary, warm, kind.”

A religious man himself, he thinks it is reasonable to question a candidate about whether their beliefs would interfere with their work. “But she has answered those questions forcefully… I fear she is now being reduced to an ideological caricature, and that pains me, knowing what a rich and thoughtful person she is.”

Her confirmation hearing for the appeals court seat featured a now-infamous encounter with Senator Dianne Feinstein, who voiced concerns about how her faith could affect her thinking on the law. “The dogma lives loudly within you,” said Mrs Feinstein in an accusatory tone. Defiant Catholics adopted the phrase as a tongue-in-cheek slogan on mugs.

Barrett has defended herself on multiple occasions. “I would stress that my personal church affiliation or my religious belief would not bear in the discharge of my duties as a judge,” she once said.

However, her links to a particularly conservative Christian faith group, People of Praise, have been much discussed in the US press. LGBT groups have flagged the group’s network of schools, which have guidelines stating a belief that sexual relations should only happen between heterosexual married couples.

The Guttmacher Institute, a pro-choice research organisation, declined comment on Barrett specifically, but said appointing any new conservative Supreme Court justice would “be devastating for sexual and reproductive health and rights”.

To secure the position on the Supreme Court – a lifelong job – Barrett will still have to pass a gruelling confirmation hearing, where Democratic senators are likely to take a tough line, bringing up many of their voters’ concerns.

Professor Turley thinks she will take it her stride, due to the “civil and unflappable disposition” she showed during the hostile questioning for the appeals court position.

“She is someone who showed incredible poise and control… her [appeals court] confirmation hearing was a dry run for a Supreme Court confirmation. She has already played in the World Series.”

DISCLAIMER: The Views, Comments, Opinions, Contributions and Statements made by Readers and Contributors on this platform do not necessarily represent the views or policy of Multimedia Group Limited.
Tags:
Amy Coney Barrett
Trump
US Supreme Court