Senators will question Trump’s SCOTUS nominee today. Here are the key topics we expect to come up 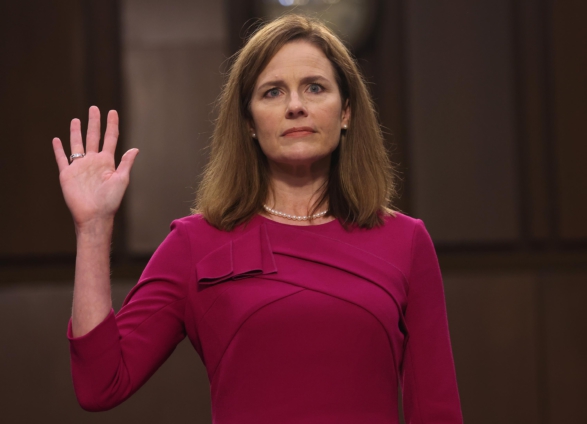 Following Amy Coney Barrett’s opening statement yesterday, the committee adjourned until today for a round of questioning expected to begin at 9:00 a.m. ET.

Barrett will be grilled by Senate Judiciary Committee members over the course of today and Wednesday. Senators have the option of appearing and questioning the witness in person or remotely.

Here are some topics that will likely take center stage:

Voting rights: Before even reaching substantive constitutional questions, Democrats are expected to ask Barrett whether she will recuse herself from any election-related litigation that reaches the high court. Although it’s a long shot, it is always possible the Supreme Court will once again be called upon to decide the election.

“I think this will end up at the Supreme Court,” Trump said at a recent White House event. “And I think it’s very important that we have nine justices.”

Barrett is likely to avoid the question, but if she is confirmed it will be her own choice whether to recuse.

The Affordable Care Act: Democrats during Monday’s hearing turned the focus on the Affordable Care Act. A week after Election Day, the Supreme Court will hear the most important case of the term and decide whether to invalidate the entire law. The decision could strip millions of their health care during a pandemic. Critics of Barrett will point to some of her previous writings, before she took the bench, where she expressed skepticism about the reasoning Chief Justice John Roberts used back in 2012 to uphold the law under the taxing power.

Roe v. Wade: Democrats will also seize on positions Barrett took before she was a judge, on Roe v. Wade — the 1973 landmark decision legalizing abortion. Unlike other recent nominees, there is a significant paper trail detailing Barrett’s views on abortion, and Roe, as a law professor at the University of Notre Dame.

She signed a petition, for example, with other faculty, for a paid advertisement reaffirming the school’s commitment “to the right to life” and criticizing Roe. “In the 40 years since the infamous Roe v. Wade decision over 55 million unborn children have been killed by abortions,” the ad reads.

The Second Amendment: Last term, four conservative justices urged the court to take up a Second Amendment case, yet by the end of the term they had declined to do so. That suggests there wasn’t the necessary five votes. Now, if Barrett is nominated, she could be that vote.

In one decision, Kanter v. Barr, she dissented when her colleagues upheld a law barring convicted felons from possessing a firearm. The language she used in the opinion tracked closely with language used by conservative Justice Clarence Thomas. Like Thomas, Barrett suggested that lower courts are thumbing their nose at Supreme Court precedent to uphold gun restrictions treating the Second Amendment like a “second class right.”

In the upcoming hearings Sen. Richard Blumenthal, a Democrat, has vowed to make her views “front and center” to show how “Judge Barrett’s extremist, hard-right views of the Second Amendment will do real harm to real lives in real ways.”

Same-sex marriage: Barrett does not have a robust record on same-sex marriage, but in a 2016 speech at Jacksonville University made while she was still a law professor, she laid out both sides of the debate.

DISCLAIMER: The Views, Comments, Opinions, Contributions and Statements made by Readers and Contributors on this platform do not necessarily represent the views or policy of Multimedia Group Limited.
Tags:
Amy Coney Barrett
SCOTUS
Senators
Trump