Analysis: How the NPP won an election it should have lost 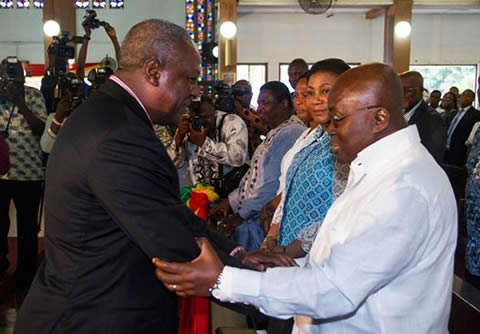 We have come to the end of what is possibly the ‘noisiest’ election of my lifetime. With the climax being the announcement by the Electoral Commission (EC) chairperson Charlotte Osei that the New Patriotic Party (NPP’s) candidate Nana Addo Dankwa Akufo-Addo won the polls with 53 percent of votes cast while the National Democratic Congress (NDC’s) John Mahama who is incumbent president came second after bagging 44 percent of votes cast.

This is an election I think the NDC should have won ‘hands down’. They had everything ‘going on well’ for them, compared to the NPP which for a long time was ‘clutching onto a walking aid’ to stay up right throughout the campaign.

First, the NPP went into the 2016 elections, a very divided entity. We will all recall how the internal rift between the pro and anti Akufo-Addo camps hit a crescendo sometime last year with the suspension of elected chairman Paul Afoko, Vice chairman Sammy Crabbe and General Secretary Kwabena Agyepong. And the subsequent bad press, numerous incidents of death-resulting violence and court battles that appeared to have created too much distraction for a party that should be focused on winning the election.

The NPP was dissipating energy and fighting among themselves, with several efforts to keep the party bonded proving fruitless. You don’t do that with months to a crucial election. And no one would expect a divided house to stand. Comparatively, the NDC looked like a more united force, with the body, soul and spirit of the party working together for one common goal – retaining power.

Also, the NDC had at least three main campaign teams on the ground. One led by the president, his vice and then his chief of staff. Then, there were the government ministers who left their jobs in Accra to campaign. The NPP on the otherhand had two main campaign teams; the flagbearer and his running mate. An outnumbering by one. The NDC distributed more cash, rice, oil and canned fish in poor neighbourhoods as part of efforts to induce people to vote for them than the NPP did. Even on voting day, the NDC bused a lot more of its activists to their strongholds to go vote than the NPP.

Thirdly, incumbency was on the side of President Mahama. Incumbency that the NDC government really abused. With the president flying across the country using state resources to campaign under the guise of commissioning national projects. With road infrastructure, school projects and boreholes springing up in communities overnight with days to the elections, all to entice voters. With huge donations to traditional councils from government ahead of the elections, just to buy their goodwill.

And finally, history was on the side of the NDC’s John Mahama. Since Ghana returned to democratic rule in 1992, every incumbent president that came before the good people of this country seeking re-election got it. Thanks mainly to what we spoke about earlier – incumbency. And if you are a superstitious person, Ghanaians have elected only Johns as president since our return to democratic rule. But Nana Addo is not a John, unlike Mahama.

So, all other things being equal, the NDC looked better set for victory than the NPP. The major elements that anyone would look out for in a successful campaign were all working for the NDC ahead of the ‘d-day.’ A united front, a good campaign, precedence and public goodwill.

So what went wrong?

Clearly, the electorate were fed up with the NDC after eight years of the Mills – Mahama Administration. That was obviously what did the trick for the NPP. After more than four years of power blackout (dumsor), that had crippled thousands of small businesses across the country and caused a lot more people their jobs, majority of the populace were in the mood to try something new.

The corruption tag around the neck of officials of the incumbent government thanks to misappropriation at the Savannah Accelerated Development Authority (SADA), the Ghana Youth Employment and Entrepreneurial Development Agency (GYEEDA) and Ghana’s Brazil 2014 campaign had stuck. And no one wanted another of that.

Economic mismanagement characterized by record falls in the value of the cedis against major international currencies, imposition of more taxes which no one saw the benefit of except government officials themselves, and the return to the International Monetary Fund for credibility to manage our economy, cannot guarantee a mandate for another term.

Secondly, the NPP had a better message than the NDC. The latter was mainly telling the electorate: “keep us in power to continue our good works.” “Good works” which the people were not convinced looked as good as the government claimed.

The NPP being a party in opposition had bold and ambitious ideas like “one factory, one district” which the ordinary person could easily relate to and associate with. And the electorate had a lot more trust for the NPP and its ability to fulfill the manifesto pledges than the NDC which had repeatedly gone back on its words over the last eight years.

The lesson from the just ended contest is clear. Democracy is about the people. They decide who governs. It matters less how much money you have. It doesn’t count much how fantastic the campaign you run is. And it matters very little the ‘terrible’ state of affairs within a competing political party. As long as the people have an option, once they are dissatisfied with how you govern them, they will change you.

You can read more from the writer by visiting http://www.josephopokugakpo.wordpress.com