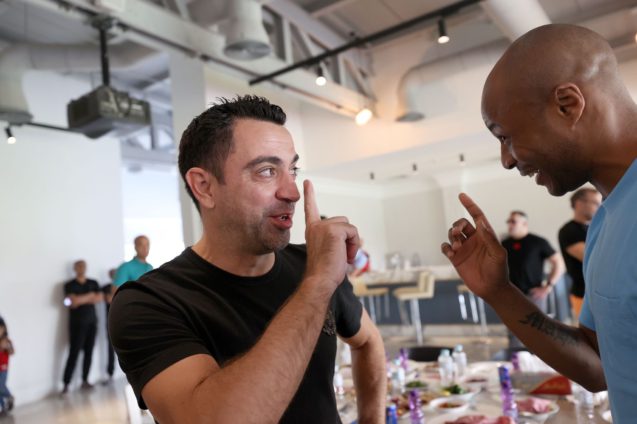 Ghana captain Andre Ayew has wished Xavi well after Al Sadd confirmed the departure of the Spaniard, who will be taking charge of FC Barcelona as head coach.

Ayew expressed his gratitude to his former boss on Twitter stating: “Mister thank you for everything. Your humbleness is unique, learned so much in this few months. Proud to have worked with such a legend May Allah bless your new chapter. Good luck Mister.”

The 31-year-old joined the Qatari giants last summer and has scored 7 goals in his first 10 games for the club.

Xavi is set to take over as Barcelona coach with Al Sadd saying they have agreed to allow him to join the Spanish giants.

The Qatari club had previously said their 41-year-old boss would not be allowed to leave. Xavi, who played 779 games and won 25 titles with Barca, had said publicly he hoped “to go home” as Barca boss and that an agreement could be reached.

The World Cup and two-time European Championship-winning former Spain international left Barcelona for Al Sadd in 2015, first joining the club as a player.

He took over as head coach after retiring in 2019 and led them to last season’s league title. They are unbeaten in 36 league games.

The Qatari club tweeted that Xavi “is an important part of Al Sadd’s history” and wished him success in the future.

“The administration has agreed on Xavi’s move to Barcelona after the payment of the release clause stipulated in the contract,” the club posted on Twitter. “We’ve agreed on cooperation with Barcelona in the future.”