The party received 61% of votes cast during Wednesday's ballot, the Angolan electoral commission said on Friday.

The opposition Unita party, which received 27%, disputes the commission's count.

João Lourenço will take up the presidency, after an election marking the end of nearly four decades in power for President José Eduardo Dos Santos.

The electoral commission says 98% of the country's votes have been counted.

However, voting in the election does not end until Saturday due to delays in getting the ballot papers to more than a dozen polling stations in remote areas.

But with the MPLA taking such a commanding lead, the outstanding ballots will not change the outcome.

Mr Lourenço, the former defence minister, has been anointed as the successor to Mr Dos Santos.

However Mr Dos Santos, whose 38-year reign makes him the world's second-longest serving president, will remain in control of the party. 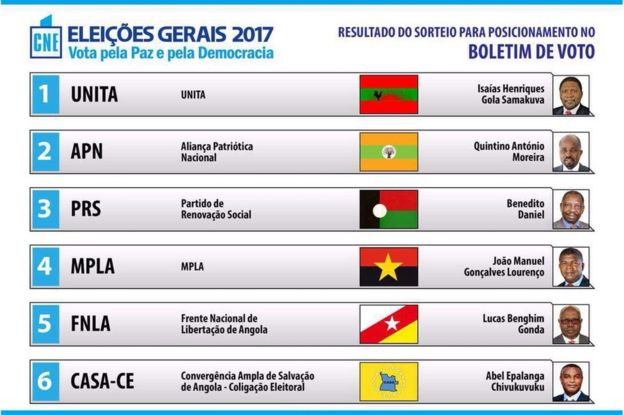 Voters were given a choice of six candidates and parties

The MPLA has been the only party in power since Angola's independence from Portugal in 1975.