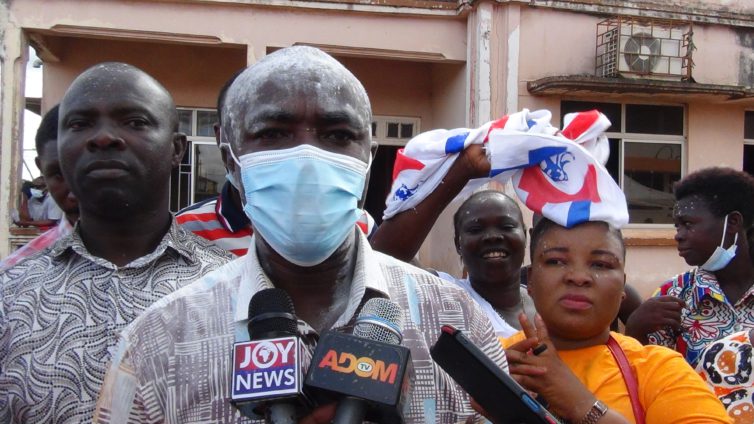 The Sunyani East Constituency Secretary of the New Patriotic Party, Ansu Kumi, has been endorsed by the assembly members after securing more than the two-third vote required.

The election was conducted by the electoral commission and witnessed by the Bono Regional Minister, Justina Owusu Banahene, the Member of Parliament for Sunyani East, Kwasi Ameyaw-Cheremeh, Regional party chairman, Kwame Baffor, among other high ranking officials.

After his confirmation, Ansu Kumi, also a former presiding member of the assembly, thanked the President, Nana Akufo-Addo, and promised to coordinate the respective roles of departments under the assembly to ensure the expected development is achieved.

He also said he would work to ensure the security of the municipality is such that residents can go about their legitimate activities without fear.

“I will get in touch with the key stakeholders to brainstorm to ensure we do our bit for the youth to get jobs to augment that of government on employment”, he stated.

He further said together with the assembly members, they would strive to ensure everyone living in the municipality would be satisfied with the kind of services the assembly seeks to render.

The new Sunyani MCE, Ansu Kumi, is also the National Association of Local Authorities of Ghana (NALAG) representative for Bono Region, an Assembly member for Ankobea electoral area in the Sunyani East Constituency, and a teacher at Twen eAmanfo Secondary Technical School in Sunyani.

The MP for Sunyani East constituency, Kwasi Ameyaw Cheremeh, had earlier appealed to the assembly members to ensure the tradition of a 100% endorsement by the assembly is sustained.

He said the development of the municipality is of interest to all of them and believes the president’s nominee will continue with the developmental projects.

Earlier, the Berekum East Municipal nominee, Kofi Adjei also got his confirmation after a 100% yes vote. 37 out of the 38 assembly members present all voted to approve the President’s nominee.

Kofi Adjei, who is starting his second term as Berekum East MCE said, developing the communities remains a priority, and with a united front, the benefit of their hard work will be evident and beneficial to all.

He also thanked the President, Nana Akufo-Addo for the honor done to him and the Member of Parliament for Berekum East, Nelson KwakuKyeremeh for his support.