Joshua, who was making the second defence of his belt, knocked the American down with a short right before the referee waved the fight off.

The 27-year-old now has 18 knockouts from as many fights and will face former heavyweight king Wladimir Klitschko at Wembley Stadium on 29 April.

"This is the step-up people have wanted," said Joshua. "Klitschko wants his belts back and may the best man win."

Klitschko, who lost his WBA, IBF and WBO belts to Tyson Fury last year, stepped through the ropes to speak to Joshua.

"He is the best man in the division and the excitement speaks for itself," said the Ukraine fighter. "This is what the fans want and this fight must happen." 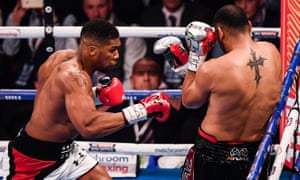 The first round of the main event featured little action, although Joshua did land with a good left hook on the bell.

With Molina content to spoil, Joshua found it difficult to get off his shots in the second but he finally found his range in the third, with a devastating outcome.

With Molina pinned in the corner, Joshua chopped him down with a short overhand right and it was a minor miracle that he managed to regain his feet.

But the American only lasted a few more seconds, referee Steve Gray calling a halt to proceedings as Joshua was raining blows upon the challenger. Before the fight, Molina said WBC champion Deontay Wilder, with whom he lasted nine rounds last year, was the hardest puncher in the division. Having felt the full force of Joshua's fists, he might have changed his mind.