Anti-LGBTQ+ Bill: Insults, curses, and threats have no place in a secular democratic republic – Group of 18 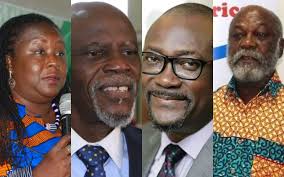 The Group of 18 lawyers and academics opposing the Anti-LGBTQ+ Bill has called for an end to insults and other forms of abuse against opponents of the bill.

According to them, the insults and abuses do not add anything substantial to the ongoing debate and paint a terrible picture of those who issue them; thus should not be countenanced.

“They rather cloud the issues and divert attention from the serious constitutional, legal and public interest issues raised by the introduction of ‘The Promotion of Proper Human Sexual Rights and Ghanaian Family Values Bill, 2021’ in Parliament,” the Group stated.

The Group stated that the abuses only goes to rehash their earlier claim that the Bill “by its very contents, is stoking a crusade of cultural fanaticism, social intolerance, bigotry and hatred that should be condemned by all well-meaning and responsible Ghanaians.”

The Group noted threats to their lives by some traditional leaders and supporters of the bill due to their opposition to the Anti-LGBT bill.

“We are alarmed at these and other attempts to silence dissent to the Bill,” the group stated.

It cited recent incidences of abuse meted out against persons based merely on suspicion that they are gay.

“We also note the disturbing case of the two sisters, one of them a prominent athlete, who were attacked in their home in Achimota, as well as other attacks on persons, on suspicion of being homosexuals.

“None of our religious leaders nor the sponsors of the Bill have called out these barbaric incidents and condemned their perpetrators. This is particularly ironic because Bill’s sponsors claim that they aim to protect sexual minorities against such illegal attacks,” the Group said.

It further decried the ‘loud silence’ of state organisations, including the Commission on Human Rights and Administrative Justice (CHRAJ) and the National Commission for Civic Education (NCCE) that are constitutionally mandated to promote human rights, democratic citizenship, free speech, and responsible media coverage.

“We call on these institutions and individuals to do the right and proper thing to condemn such anti-democratic and illegal practices,” it stated.

Consequently, the Group of 18 is calling on the Inspector General of Police and the Ghana Police Service to “invite for questioning all those who have issued threats against members of the LGBTQ+ community and against those who have expressed opposition to the Bill.”

It also sent a word of caution to traditional leaders vowing to banish suspected gays and, in some instances, kill suspected gays to desist from such acts.

“We wish to emphasize that Ghana is a democratic secular republic, and our chiefs, however, revered, do not have any legitimate and constitutionally recognized power whatsoever to expel any person from a traditional area or restrict the liberty and freedom of movement of persons in Ghana.

“The Supreme Court in the case of Nana Adjei Ampofo v The Attorney-General & President of the National House of Chiefs (Suit No. J.1/8/2008, decided on 20 July 2011), has clearly ruled that under the Constitution, chiefs and traditional authorities have no power to restrict the freedom of movement of any person in Ghana,” the Group stated.

DISCLAIMER: The Views, Comments, Opinions, Contributions and Statements made by Readers and Contributors on this platform do not necessarily represent the views or policy of Multimedia Group Limited.
Tags:
Anti-LGBT bill
Group of 18
Promotion of Proper Human Sexual Rights and Ghanaian Family Values Bill 2021