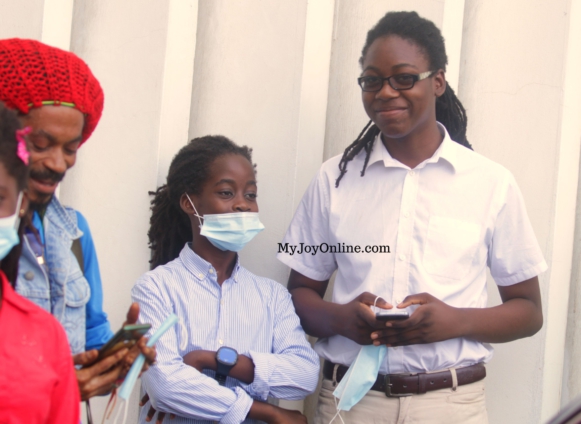 The Executive Director at Africa Education Watch, Kofi Asare, has cautioned staff of the Ghana Education Service (GES) against any form of hatred towards the two Rastafarian students saying it will not be condoned.

According to him, the students must be given the needed support to enable them relish their rights to education.

“Any staff of the GES who will openly express or exhibit such animosity will have to be dealt with in accordance with the law,” he said Tuesday, June 1.

His comment comes on the back of a court ruling Monday, May 31, in favour of the students, Tyron Iras Marhguy and Oheneba Kwaku Nkrabea to be admitted to the Achimota Senior High School.

The School, in March this year indicated that the two could only be enrolled on the condition that they shave their dreadlocks per the school’s academic regulations.

But, during the final court hearing Monday, on the controversial issue that has persisted for over a month, an Accra High Court, presided over by Justice Gifty Agyei Addo, ruled that the fundamental human rights of two students cannot be limited by the rules in of the school in question.

Speaking on JoyNews’ AM Show, Kofi Asare said he wished that the matter had been settled amicably without going to the court.

“But for now, once the matter is settled, let’s support the children to enjoy their right to education because they are already late, its past one month in school and we wish them well,” he told host, Mamavi Owusu Aboagye.

“This is the 9th ruling I am seeing in Africa in the past five years, this matter shouldn’t have gone to court, and in all the cases, the judgment has followed the same angle that you cannot discriminate against ones right to education on grounds of religion.”

Speaking to the media after the court ruling, the father of one of the boys, Raswad Nkrabea, although stated that he was elated about the ruling, said the family is yet to decide on “whether or not we will send the children to the School.”

Reacting to the uncertainty, Mr Asare assured there is nothing to worry about as he recalled the Deputy Director-General of the GES, before the court ruling, stated the Service will ensure that their staff in Achimota School will not act in a manner that discriminates against the two students after the verdict.

“And so our job is to ensure that the ruling is implemented, not just anyhow but then in good faith so I think that I will rely on the promise of Dr Tandor and expect that there won’t be any animosity which will not go unreported.”

The Africa Education Watch Boss further noted that the Achimota school believes in inclusion, hence “I do not expect that [any hatred] to happen.”

He, however, opined that the GES could have insisted that its directive be complied with should the institution be strong, “but unfortunately, GES became powerless.”

Mr Asare, therefore, advised that the country’s educational system sufficiently embraces the concept of inclusion, without depending on the law court to solve issues that could be handled by the parties involved.

“One key cardinal principle of a society that is growing, democratic society for that matter, is its ability to resolve issues and so I will implore other countries not to follow this example. I wish we would have settled this matter out of court.”