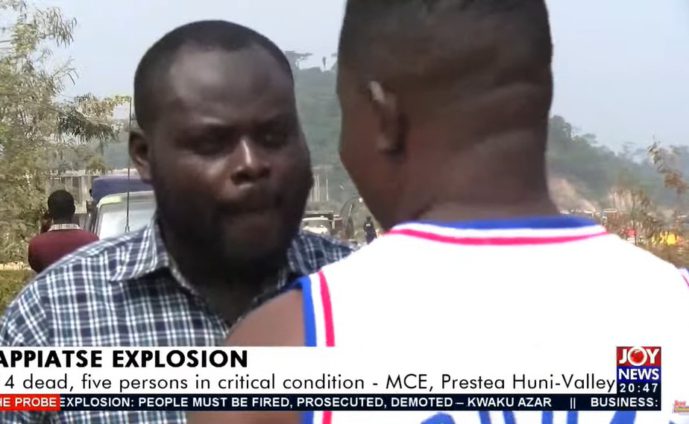 Discussions on the Sunday, January 23, 2022, edition of The Probe focused on the Apeatse explosion.

Panelists on the show were; Deputy Director-General of the National Disaster Management Organisation (NADMO), Seji Saji Amedonu, and JoyNews‘ Maxwell Agbagba who was on the beat, thus, giving an update on the current state of affairs.

According to Mr. Amedonu, a total of 954 persons have been rendered homeless, with some still receiving treatment at various hospitals and 14 dead.

He stated that his outfit has gone to the aid of the victims, adding that some benevolent agencies have also supported the victims with relief items.

Maxwell Agbagba spoke to the Municipal Chief Executive of Prestea Huni Valley, Isaac Dasmani, who confirmed that 14 people have so far died.

He also confirmed that plans are underway to reconstruct the town.

“For now we can say that there are 14 who are dead and about five are in critical condition now – there are three in Kumasi, one in Korle-Bu.

“There is one too that this evening I got the information that we need to refer him on Monday to Cape Coast.”

Mr. Dasmani said organisations, including Gold Fields Company Limited and The Red Cross have donated tents which are being erected for the victims to move into, from the congested churches being used as temporary shelters.

“We have received a lot of relief items but we can’t share them because of where they are now. Once we move them to that place, we can provide them with all the necessary utensils they can use to cook, we can distribute the food to them.”

“Hopefully, by close of Sunday, we would finish preparing the site and by Tuesday morning or evening, we move them to the site. We are creating washrooms and places of convenience…I am also going to buy poly tanks to supply them with enough water,” he added.

“A car hit me from behind. All I heard was a bang. So I fell off and slid on the coal tar for a while. In the process, I saw my motorbike sliding on the road as well. I did not see the car that hit me because it was from behind.”

“It was a taxi driver and a welder who rushed me to the Aseda Hospital. I was receiving treatment at the hospital when we heard the blast. Everybody ran, including me. Later, I saw many casualties being brought in. The Nurses even abandoned me to attend to the seriously injured victims of the accident,” he recalled.

The Director-General of Public Affairs at the Ghana Police Service, ACP Kwesi Ofori, who was expected to be on the show could not make it.