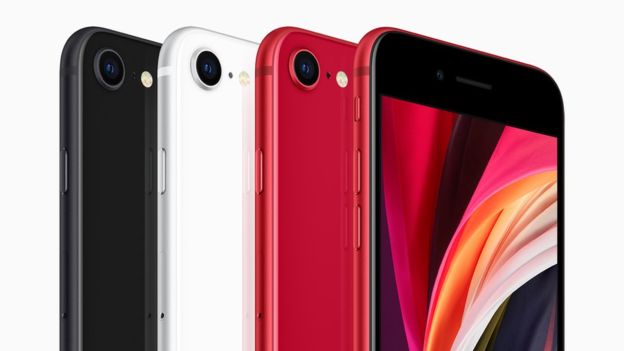 Apple has announced a new iPhone SE, reviving a mid-market brand it had discontinued in 2018.

It resembles the form of 2017’s iPhone 8 with a 4.7in screen, and a fingerprint ID sensor but not a depth camera for facial recognition.

It is powered by the same processor as the flagship iPhone 11 Pro, but lacks multiple rear cameras.

The handset costs the same as the original SE in the US, but is more expensive in other markets.

One analyst said that having a mid-range phone again could help Apple compete for new customers against rivals such as Samsung and Google, which have a strong presence in that market sector.

“Once you buy an iPhone you are more likely to buy another one,” said Dan Iver from Wedbush Securities.

In February, Apple warned that the coronavirus lockdown in China would impact iPhone production and lower sales.

Physical stores, including Apple’s, remain closed in many countries.

But Mr Iver expects the phone to sell between 20 million and 25 million units in the first six to nine months.

“Apple’s hands are almost being forced to bring this out because from a supply chain perspective it was ready,” he said.

But he added that while competitors might be similarly priced, “Apple is this golden brand”.

The device supports wireless charging. Its rear-facing camera’s resolution is 12 megapixels and can still create background blur in portrait photos, despite lacking a second lens. The selfie camera is 7MP.

“The second-hand market is pretty vibrant for Apple so are there users who have never have a new iPhone that will want one, and can afford it at this price,” said the Creative Strategies consultant.

But she also warned: “I think the phone has to have some compromises. It can’t be too close to the iPhone 11 or a iPhone10R – or what is the point?”

The iPhone SE goes on sale on 24 April.