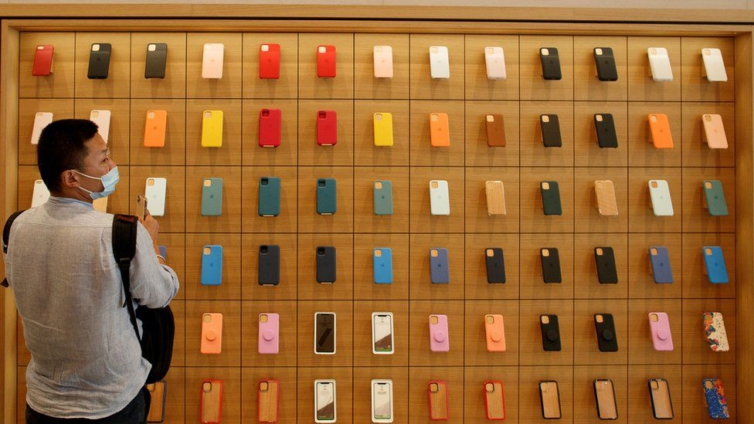 Apple sales have hit another record, as families loaded up on the firm’s latest phones, laptops and gadgets during the Christmas period.

Apple’s gains follow the release of its new iPhone 12 suite of phones, which executives said had convinced a record number of people to switch to the company or upgrade from older models.

The firm said growth in China – where the pandemic has already loosened its grip on the economy – was particularly strong, helped in part by demand for phones compatible with new 5G networks.

Sales in the firm’s greater China region, which includes Hong Kong and Taiwan, jumped 57%. In Europe, sales roles 17%, and they rose 11% in the Americas.

“The products are doing very well all around the world,” said Luca Maestri, Apple’s chief financial officer. “As we look ahead into the March quarter, we’ve very optimistic.”

Analyst Dan Ives of Wedbush Securities said he thought the firm was just at the beginning of a “super-cycle” as Apple devotees finally trade in old phones, coinciding with upgrades to telecommunications networks.

“With 5G now in the cards and roughly 40% of its ‘golden jewel’ iPhone installed base not upgrading their phones in the last 3.5 years, [Apple chief Tim] Cook & Co have the stage set for a renaissance of growth,” he wrote.

Big Tech is having an exceptionally lucrative pandemic.

It’s hard not to be wowed by some of these figures.

That Apple recorded more than $100bn in sales in just three months is simply astonishing.

Facebook figures are also well up on where they were last year.

As other companies have struggled to survive, Big Tech has flourished.

There are other reasons for some of these incredible figures. Certainly it seems iPhone enthusiasts were holding out for the new 5G enabled iPhone12.

But it’s not just Apple and Facebook, all of the massive tech companies are having a bumper year.

Perhaps then it’s no surprise that these companies are posting record breaking figures.

But others point to these figures as yet more evidence that Big Tech has become too big to fail.

These figures are impressive. But they also attract the attention of politicians who are increasingly asking difficult questions – like are these tech mega companies operating in a market that is fair and with enough competition?

DISCLAIMER: The Views, Comments, Opinions, Contributions and Statements made by Readers and Contributors on this platform do not necessarily represent the views or policy of Multimedia Group Limited.
Tags:
Apple
Apple iPhone
Christmas Sales
coronavirus pandemic