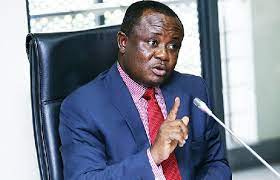 Chairman of the Appointments Committee, Joseph Osei Owusu, has justified the vetting and approval of 4 Deputy Ministers- designate by Parliament on Wednesday, June 23.

Speaking to JoyNews PM Express, Wednesday June 23, Joseph Osei Owusu, who is also the First Deputy Speaker of Parliament, stated that the approval of a nominee is dependent on the majority of members of a decision-making body, therefore, the absence of the NDC MPs does not negate the approval process.

“For all decisions, what you look out for is a quorum, does the appointment committee have the quorum to proceed? If yes, at the committee, we don’t dissect to see which members were present or not present. A quorum to make a decision is what was necessary.

His justification comes as a reaction to calls by the Minority group demanding a re-vetting of four Deputy Ministers after they staged a walkout during proceedings in Parliament to approve the nominees.

Speaking on the floor of Parliament, Deputy Minority Leader, James Klutse Avedzi, noted that the Minority MPs could not participate in the approval process because NDC MPs on the Appointments Committee were absent during their vetting on June 11.

Their absence, he explained, was as a result of their participation in the Green Ghana Project as directed by the Speaker.

But the Ashanti Bekwai legislator was insistent that the Committee, despite the Speaker’s directive for members to participate in the national tree planting exercise decided to meet and vet the nominees.

For him, the number of members on the Appointments Committee was sufficient for the vetting to proceed.

Mr Osei Owusu further added that the approval of the nominees was based on their qualifications.

“I think we are overstretching who was present and who was not present. It is okay for me, I don’t have a problem if for some principled position, that we did not participate in the consideration so we will not participate in the approval, I will not quarrel with them as long as Parliament is not disabled from performing its functions,” he stated.

DISCLAIMER: The Views, Comments, Opinions, Contributions and Statements made by Readers and Contributors on this platform do not necessarily represent the views or policy of Multimedia Group Limited.
Tags:
Appointments Committee
Deputy ministerial nominees
Joseph Osei Owusu
Minority in Parliament