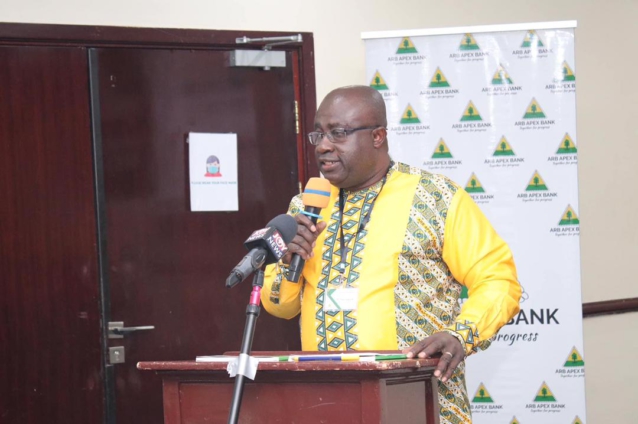 The Ghana card has become the official document required for verification of most financial transactions and SIM card registration, as the government seeks to digitalise the Ghanaian economy.

The relevance of the card has since forced many Ghanaians to troop to registration centres of the National Identification Authority nationwide to obtain it.

But the centralized system for replacing the card or rectifying valid details on it has left many frustrated at the regional branches of the National Identification Authority.

The ARB Apex Bank has to this effect suggested the decentralization of the issuance of the Ghana card.

Chairman of the Board of Directors of the Bank, Dr. Anthony Aubynn, indicated that a decentralized system would facilitate quicker retrieval of lost and invalid cards.

“I believe there should be opportunity for people to get their cards. I think the government should decentralize the issuance of Ghana card,” he said.

“There’s is too much over concentration. So when it is concentrated at one place, everybody troops there. It shouldn’t be difficult for you to go for replacement. It should be possible for people to go quickly and get it done. This can be done by proper decentralization. You can’t concentrate everything at a few places and expect 30 million people to be able to access that. It is a need. In fact it should be an ongoing thing,” he said.

Many of the card seekers spend several hours in a slow moving queue at the NIA centres and sometimes are unable to retrieve the card.

They argue the situation is affecting their daily activities as some citizens travel as far as from the northern part to the Authority’s headquarters down south in Accra.

The ARP Apex Bank said it is not encountering ‘serious’ challenges with customers providing the identity card as a requirement for transactions.

That is because the Bank has procured all technological tools required for the smooth implementation of the policy which started on July 1, 2022.

But, they are hoping every citizen will be served to allow customers access their bank accounts and transact conveniently.

“Apex bank procured all the required equipment that would allow the application of the new policy using Ghana card. We haven’t had serious problems. There could be some teething problems. There are those who have still not received their Ghana cards. And that is a problem. As a country we need to address that. Some people are complaining that they don’t have their cards and therefore they can’t access their account,” said Dr. Aubynn.

Dr. Aubynn was speaking on the sidelines of the 20th Annual General Meeting of the ARB Apex Bank held in Kumasi.

He encouraged individuals to invest or purchase some shares in the rural banking sector, which according to him has more returns than the high-street banks.