Are the guardians of the public purse thieves? 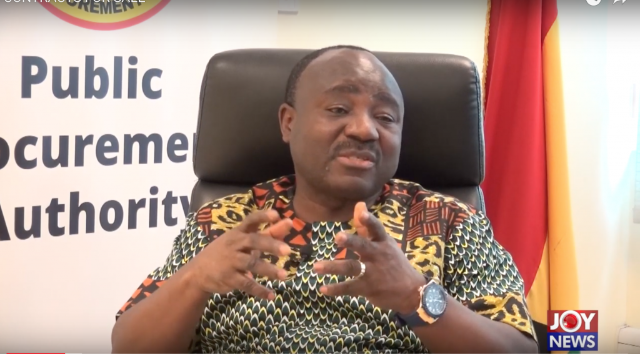 There is yet another expose by Joyfm and this time, the fingers in the cookie-jar belong, apparently to the CEO of the Public Procurement Authority, Mr Adjenim Boateng Adjei. The President, in reaction to this expose, has suspended the CEO and asked for investigations. The Board of Directors of the Public Procurement Authority has, in a pathetic “cover-our-butt” statement,  welcomed the investigation and proclaimed its innocence.

This latest corruption scandal is particularly galling because the Public Procurement Authority is supposed to police our procurement process. This incident is the moral equivalent of leaving your daughter in the care of your most trusted friend and returning to find out that she has been defiled by your selected guardian!

Under the mast of the PPA is the reassuring phrase, “Improving Efficiency and Transparency in Public Procurement “! And yet, the leader of this Authority actually bought and sold contracts? Who can be trusted to guard the public purse? Did he not speak eloquently about integrity? Was he not lauded for exemplary leadership and for saving Ghana billions?

It is extremely disappointing that investigative journalists keep unearthing scandal after scandal and yet EOCO, the Police, BNI, CHRAJ, the Special Prosecutor and the other agencies set up and supported with public resources can’t find anything. Should we just send their resources to Joyfm and be done? Are these institutions accomplices of those fleecing our country?

Let me pause here and salute Joy FM, its staff and all the brave few who are doing such incredible work for all of us. The statement from the board of the PPA just rubbed pepper into our wounds. That 9-member board has 21 functions under the PPA of 2003 as amended in 2016.

The 4th function is to “Monitor and Supervise Public Procurement and ensure Compliance with statutory requirements”. In Manasseh Azure Awuni’s expose, the CEO claims to have advised the board of “my interest”. If the board could not see this egregious breach of procurement policies and ethics right under its nose, what does it exist for? Indeed conflict of interest and the perception of it is at the heart of the PPA’s mandate. The PPA is at the heart of democratic accountability. The PPA board had a fiduciary duty to protect the public purse and interest. It has failed. One of the key steps to restoring public confidence would be to replace the board. Nothing less would suffice.

Then there is the Minister of State for Public Procurement. What has she been doing to protect the public purse? What did she know or what should she have known? As far as the President is concerned, each of these new scandals is a slap in the face that mocks his commitment to protect the public purse and his pretensions to incorruptibility. His actions have been reactive, timid and puny. His actions and inactions have demoralized his supporters and emboldened the corrupt.

He has not been served well by many he has given responsibility to. Why have so many with a past history suggestive of corrupt motives found places in his government? I believe firmly, and the President must understand that even a President who is NOT corrupt but permits corruption would ultimately be judged by history to be corrupt. And those who tell him otherwise are liars.

Finally, these serial and endless scandals are delegitimising our democracy. Parliament must step up to its responsibility of executive oversight and ask questions. We need to know if this is isolated or broad and who else has been selling or buying contracts under the table. Our patriots need to step up and help restore the people’s confidence in our democracy. Despite the presence of some good men, the public is beginning to believe that our governance is dominated, regardless of which party is in power, by a criminal cabal.
We must, together, save our democracy.
May God bless Ghana.