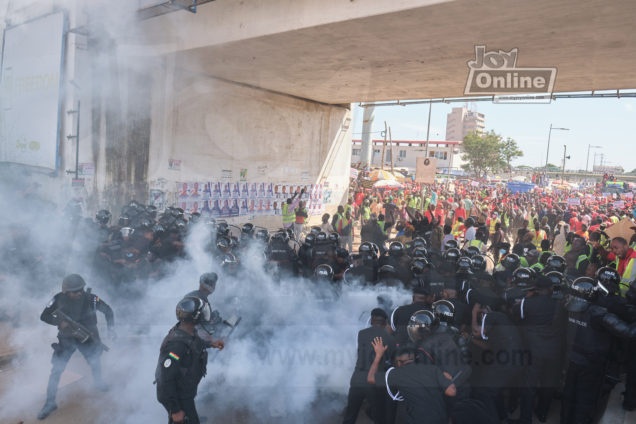 The Ghana Police Service has justified the use of tear gas and water cannons during the Arise Ghana protest on Tuesday.

The police in a statement signed by the Director of Public Affairs, Grace Ansah-Akrofi, explained that the service resorted to the use of tear gas and water cannons to “subdue the rioting and restore order.”

This, according to them, happened after the Arise Ghana protesters went contrary to court orders directing that the protest should commence at the Obra Spot in Accra and end at the Independence Square.

According to the police, although the demonstration by the Arise Ghana group commenced with demonstrators gathering at the Obra spot at about 8 am, “the organizers insisted on using routes leading to the Jubilee House.”

They added that “all attempts to persuade them to comply with the court-approved routes did not yield the expected results.”

The police said, “Unfortunately all without any provocation, the demonstrators began pelting the police with stones.”

The release stated that “the demonstrators further regrouped and burnt tires on the road around Circle.”

According to the police, they were forced to use tear gas and water cannons to quell the rioting and restore order due to the aforementioned reasons.

“The police statement further assured that all those involved in this violent demonstration will be brought to face justice.

Meanwhile, the police have reported that 12 of its officers have sustained various degrees of injuries with some vehicles damaged.