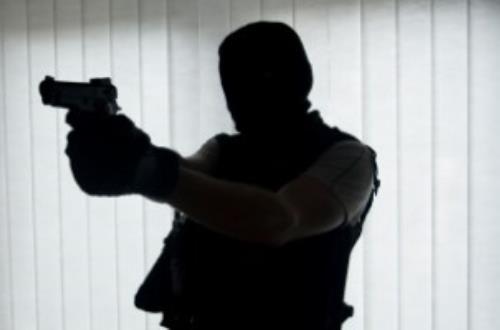 Armed robbers have raided mobile money and an electrical shop at Kasoa Opeikuma in a daylight mission.

Two suspects were said to have first entered the mobile money shop on the pretext of withdrawing money only to threaten the vendor with a gun.

Speaking to Adom News, the traumatised victim said she was hesitant in giving out her cash so she engaged in a verbal battle with the robbers.

The robbers landed a hefty on the MoMo vendor’s cheek and this woke her up to their intent. In no time, she quietly gave out all her money, yet the duo were irritated the cash was insufficient for them.

According to her, they further went into a nearby electrical shop and played out the same tactics on another female salesgirl before bolting with their booty.

Eyewitnesses said the scream of the girls alerted them to the robbery, but a warning shot deterred them from pursuing them.

Recently, a 40-year-old man was shot and killed by robbers in the same vicinity after withdrawing money from a bank.

Residents are, therefore, demanding police and military intervention, expressing worry that Kasoa is becoming a target of crime.

DISCLAIMER: The Views, Comments, Opinions, Contributions and Statements made by Readers and Contributors on this platform do not necessarily represent the views or policy of Multimedia Group Limited.
Tags:
Armed Robbers
Electrical shop
Kasoa
Mobile Money