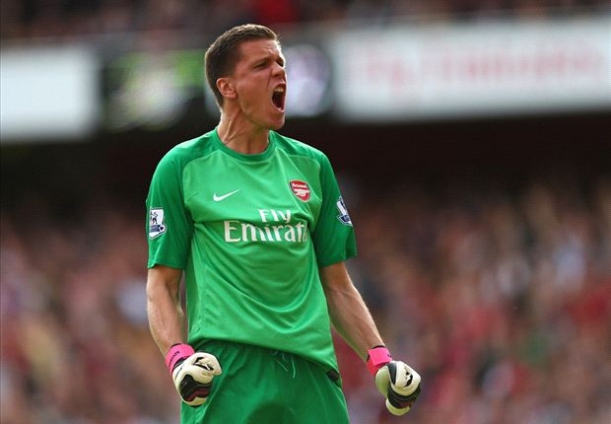 Arsenal have set up an FA Cup quarter-final meeting with Everton after overcoming Liverpool 2-1 in a feisty and gripping fifth-round match at the Emirates Stadium.

Liverpool had trounced Arsenal 5-1 at Anfield in the Premier League last weekend, but the London club took revenge through goals in each half by Alex Oxlade-Chamberlain and Lukas Podolski.

Steven Gerrard halved Arsenal's advantage with a 59th-minute penalty after Podolski was adjudged to have tripped Luis Suarez.

The visitors felt they should have been awarded a second spot-kick moments later after Oxlade-Chamberlain appeared to foul Suarez, but their appeals were dismissed by referee Howard Webb.

Victory in a game splattered with yellow cards means that Arsenal will host Everton in the last eight, but they will have bruises to nurse ahead of Wednesday's meeting with Bayern Munich in the Champions League last 16.

While Arsenal brought seven new faces into their team, Liverpool made only three changes, and the opening exchanges threatened a repeat of last weekend's game, when the Merseysiders had raced 4-0 up inside 20 minutes.

Daniel Sturridge spurned two excellent chances to put Liverpool ahead in the first five minutes, first drawing a near-post save from Lukasz Fabianski after racing onto Gerrard's slide-rule pass.

The England striker then squandered an even clearer opportunity, gathering a scooped pass from Suarez and rounding Fabianski, only to shoot into the side netting with his weaker right foot.

Arsenal manager Arsene Wenger said that his side's demolition at Anfield had made them "nervous" during their mid-week 0-0 draw with Manchester United, but they were not cowed by Liverpool's bright opening.

Instead they took the game to the visitors, and after Liverpool goalkeeper Brad Jones had tipped a Per Mertesacker header over the bar, they took the lead in the 16th minute.

As evening fell and the tension in the stadium mounted, Fabianski had to save at Sturridge's feet and Liverpool were then denied what appeared a clear penalty when Oxlade-Chamberlain felled Suarez.