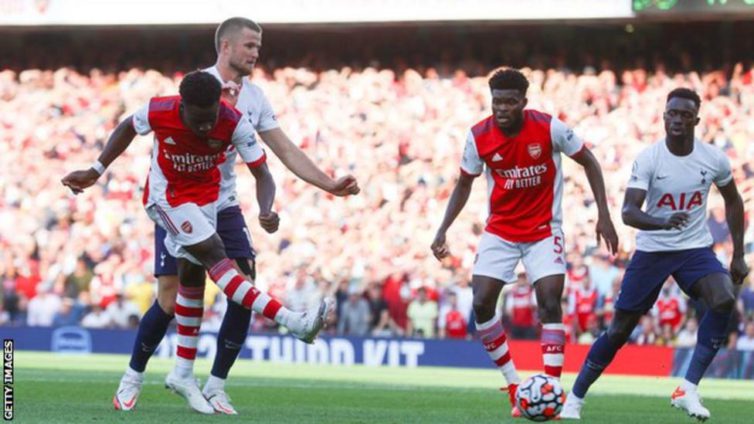 The Gunners propped up the table after three games while Spurs were top under new manager Nuno Espirito Santo – how things have changed as a rampant Arsenal ripped their shambolic rivals to shreds in a brilliant first half.

Emile Smith Rowe started the celebrations for the Arsenal fans when he arrived unmarked to sweep home Bukayo Saka’s cross after 12 minutes before the scorer turned provider as Pierre-Emerick Aubameyang got the second midway through the half.

Spurs were producing a horror show and nothing summed it up better than Arsenal’s third after 34 minutes. Harry Kane fell over the ball in a Spurs attack then missed two tackles on Saka as he raced back into his own penalty area to try to rescue the situation. Saka compounded the agony with a calm finish.

Inevitably, Spurs improved after the break, Kane bringing a good save from Aaron Ramsdale and wasting a good chance, before Son Heung-min pulled one back.

Ramsdale spared Arsenal any late anxiety with another superb stop, touching Lucas Moura’s shot on to the bar as Mikel Arteta’s side closed out a richly deserved win.

Arsenal manager Mikel Arteta has staked his Arsenal future on a long-term plan but admits he will not get quick results and has called for patience.

But there was evidence for optimism here despite those three opening league defeats.

The Gunners’ latest win was based on the brilliance and exuberance of Saka, Smith Rowe and Martin Odegaard, aged 20, 21 and 22 respectively.

The talented trio were all involved in the goal that got the hosts on their way, Odegaard bursting through Spurs’ non-existent midfield before feeding Saka, whose inviting cross was turned in by Smith Rowe.

Smith Rowe set up the second and Saka got the third, showing an energy, invention and commitment that shamed Spurs’ efforts in an embarrassingly one-sided first 45 minutes.

Aubameyang, whose own form and commitment have been questioned as he struggled, set the tone and lit the fuse on an explosive atmosphere inside the Emirates by chasing down Spurs’ defenders in the opening moments.

It was the signal for a magnificent first 45 minutes from Arsenal, who were unrecognisable from the timid and flimsy side that opened the season.

Arteta will point to the fact that he now has Ben White and Gabriel Magalhaes starting to form a defensive partnership, while Ramsdale offers presence in goal and is now surely undisputed Arsenal number one ahead of Bernd Leno.

When Spurs did raise a gallop in the second half, Ramsdale dived low to turn Kane’s shot wide then showed ability and technique to thwart Moura.

Arteta was all smiles as he took the acclaim of Arsenal’s elated fans after the final whistle – and who can blame him? This was as convincing as the Gunners have looked for a long time under his stewardship.

Problems pile up for Spurs and Nuno

Spurs manager Nuno cut a brooding, powerless figure in his technical area as he watched his side taken to the cleaners by Arsenal in that dismal first 45 minutes.

The early promise of taking Spurs top of the Premier League, starting with the opening weekend victory over Manchester City, seemed an age away as they were sunk without trace before half-time.

It was as bad as it gets, with Spurs’ body language betraying a lack of belief and no discernible tactical plan. They were pinned on the ropes for the entire half, not helping their cause by being second to pretty much every ball and wasting possession on the rare occasions they had it.

Nuno has watched his side concede three goals in three successive league games, a worrying sign for a manager renowned for establishing a solid defensive platform.

The manager himself looked a beaten man at times, a motionless presence as the full scale of Spurs’ capitulation unfolded in front of him.

The second-half introduction of Oliver Skipp and Emerson Royal for Dele Alli and Japhet Tanganga – and presumably some very harsh words from Nuno and the simple fact that Spurs could not get any worse – prompted an improvement of sorts after the break.

It was all far too little too late and Spurs did not deserve anything from this performance. It was, particularly in the first half, an insult to their fans, gathered in one corner of the Emirates and forced to endure the taunts and celebrations of their Arsenal counterparts.